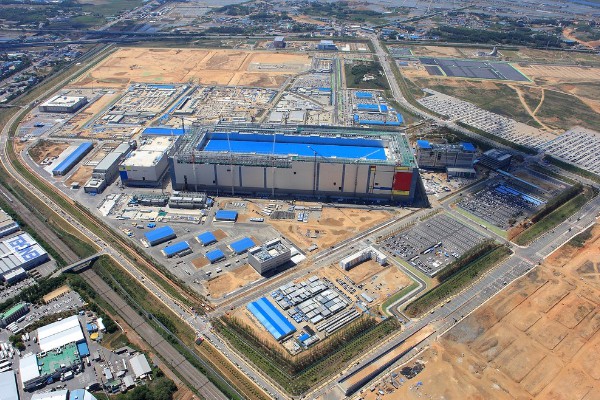 Samsung Electronics Co. is ready to break ground on its biggest chip fab in Pyeongtaek, South Korea as early as next month to accelerate next-gen chip migration before cheap Chinese products flood into the market.

Its facility in Pyeongtaek, Gyeonggi Province has already started the groundwork for the third P3 chip production line and will begin putting up the plant in September, according to Samsung Electronics and the Pyeongtaek city government on Monday.

Samsung Electronics had previously filed for fast-track approval of its construction permit with the local government.

The Pyeongtaek campus is the world’s largest chip campus and home to the Korean chipmaker’s most cutting-edge nanometer technologies, including a foundry on extreme ultraviolet solutions.

Samsung Electronics has been speeding up the expansion even before the completion of its second P2 fab. The NAND-focused P2 line went into construction in the first half of 2019 at a budget of $25 billion and is set to become fully operational by the first half of 2021.

The P3, commanding a space of 700,000 square meters, would be the biggest in the Pyeongtaek campus, which is designed to house an additional three fabs in the long-term.

The P3 line is widely expected to enter mass production in the latter half of 2023, though the company refrained from giving a definite timeframe. “The schedule could be adjusted depending on chip industry conditions,” it said.

The P3 capex is likely to top the 30 trillion won ($25.2 billion) spent on the P2 line, according to industry observers.

The speedy ramp-up is largely seen as Samsung Electronics’ preemptive move to meet a surge in chip demand ahead, fueled by work-from-home and digital trends from the coronavirus pandemic. It has also been seeking to secure its leadership against the fast ascension of Chinese rivals under Beijing’s ambitious state initiative to achieve chip self-sufficiency. China lately doubled down on its chip drive through multiple incentives, including a 10-year tax exemption on IC manufacturers.

Samsung Electronics benefited from the explosive demand for memory chips used in PCs and data centers in the wake of the COVID-19 pandemic. Operating profit in the second quarter came to 8.15 trillion won, up 23.5 percent from a year earlier, with profit in the first half gaining 14 percent thanks to its best chip earnings in almost two years.

Its foundry business also posted record quarterly and half-year revenue as customers bulked up inventories. Samsung Electronics has aggressively expanded foundry investment with an aim to dethrone longtime foundry leader TSMC of Taiwan to become the world’s No. 1 player in non-memory by 2030.

The recent set of events has opened up more opportunities for Samsung`s foundry business. Intel is considering outsourcing the production of 7-nanometer-and-smaller chips. Apple in June ended its 15-year alliance with Intel by switching to its own in-house processors for its Mac computers, further expanding the global foundry market pie.

Samsung Electronics has already embarked on preparations for its P4-P6 lines. Pyeongtaek said Samsung Electronics filed a request with the city government to secure industrial water for construction, taking steps beforehand given the lengthy approval process.