SK Innovation’s losses near $2 bn in H1, the red halves from worst-ever Q1 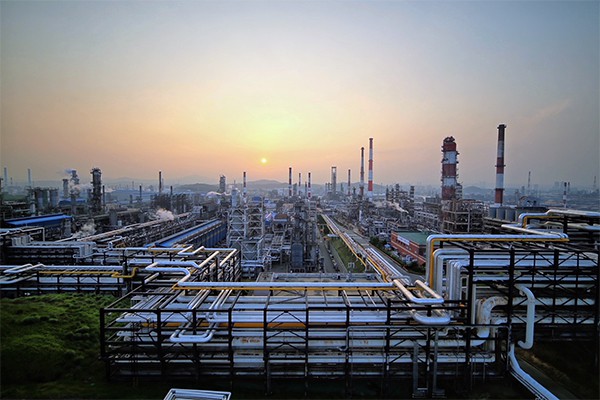 이미지 확대
South Korea’s oil refiner SK Innovation Co.’s losses neared $2 billion in the first half even as its red was halved in April-June period from a record-high in the first quarter amid lingering uncertainties and slowdown from pandemic.

SK Innovation disclosed Wednesday that it recorded 439.7 billion won ($367.8 million) in operating loss in the April-June period, narrowed from its biggest-ever loss of 1.77 trillion won in the previous quarter. A year-ago, it earned profit of 493.7 billion won.

SK Innovation cited sluggish market conditions across the board, including chemical and oil businesses. Still-weak oil prices due to sluggish demand weighed on the company’s overall income.

The recovery in oil prices however helped to lessen inventory-related losses compared with the first quarter.

Its chemical business swung back to a profit of 68.2 billion won in the April-June period thanks to reduced inventory-related losses and variable cost amid fall in fuel cost. 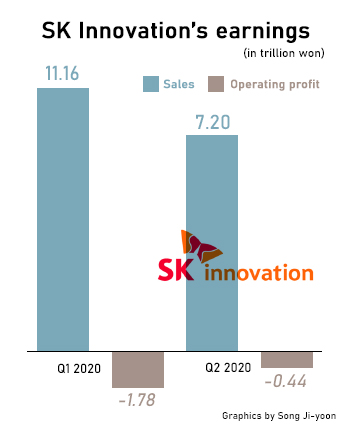 이미지 확대
SK Innovation’s lubricant business posted an operating profit of 37.4 billion won, up 8.5 billion won from the first quarter on the back of improved margin thanks to the lower crude oil prices, although sales of base oil in the United States and Europe fell significantly due to the coronavirus outbreak.

Its petroleum development business, meanwhile, posted 11.8 billion won in operating profit, down 33.5 billion won from the previous quarter amid fall in combined sales unit price and sales volume due to demand fall.

SK Innovation expected the refining margin to improve in the second half of the year amid an increase in demand for petroleum led by the gradual recovery in global economy on various stimulus measures carried out by major countries.

The company, however, forecasts difficult business environment ahead, calling for reform and innovation.

SK Innovation announced in a conference call that it would not pay out interim dividends this year as it needs to improve financial structure.