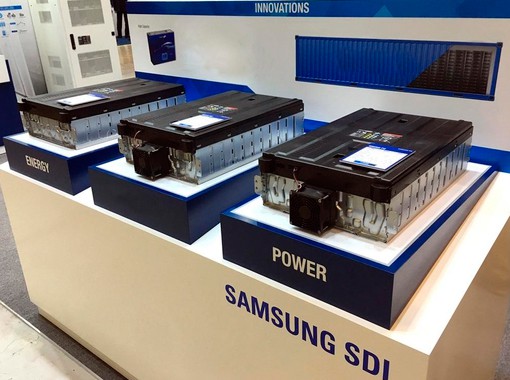 The on-quarter gain was mainly led by solid sales from its battery division that jumped 7 percent on quarter to 1.9 trillion won in the April-June period. Sales from ESS-use battery in mid- to large-size battery sector helped increase overall revenue amid robust overseas demand including of power projects in the U.S.

Sales of electric vehicle-use battery, however, dropped as major clients shut down plant operations due to coronavirus outbreak.

Sales of semiconductor-use materials in electronic materials division, meanwhile, gained in the second quarter thanks to solid demand for server-use dynamic random-access memory (DRAM). Polarizing film sales in display materials sector also gained on the back of a boost in information technology (IT) product market such as tablets and laptops. 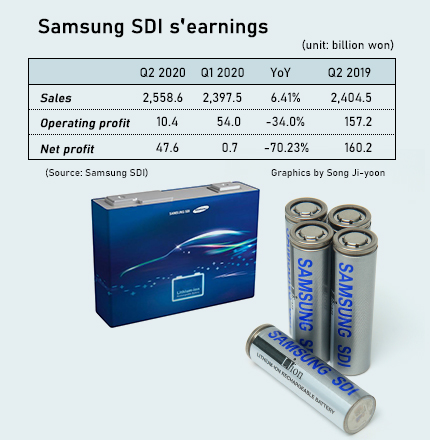 이미지 확대
Samsung SDI expected profitability to improve in the second half of the year and sales of mid- to large-size batteries to expand. The company expected sales, in particular, of electric vehicle-use batteries to increase in the coming months amid aggressive policy measures supporting electric cars in Europe. It also expected sales from ESS to gain mainly overseas.

Small-size battery division is also expected to improve business in the second half of the year on the back of increased sales of micro mobility-use round batteries such as for bicycles and scooters. Demand for polymer battery is also expected to grow amid flagship smartphone releases by major partners.

The outlook for its electronics materials business is also bright amid expected releases of new models applying OLED panels.

Sales of polymer films are projected to fall slightly in the coming months due to sluggish IT-use demand.

The industry has been projected to done better in the second quarter due to accelerated pickup in e-vehicle drive.

According to the Ministry of Trade, Industry and Energy, EV and plug-in hybrid EV sales gained 32 percent in the first half, far outperforming the 7.2 percent rise in vehicle sales during the period.

Although the country’s vehicle exports plunged 33.4 percent during the period but EV shipments jumped 82 percent.