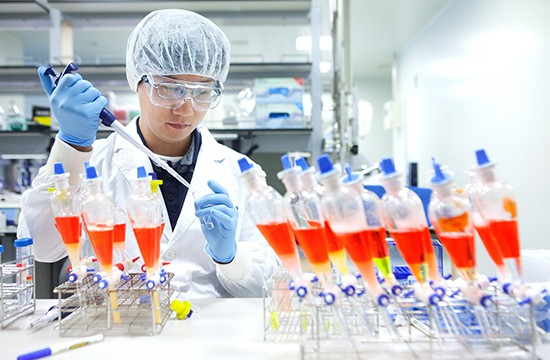 SK Bioscience Co.’s planned initial public offering in 2021 drove another feeding frenzy of its parent stocks after the company was projected by its backer Bill Gates to produce 200 million COVID-19 vaccines by next June.

Both banks were part of the underwriting syndicate for the record-breaking IPO of SK Biopharmaceuticals Co., another drug making unit under the Korean conglomerate SK Group that debuted on the local bourse earlier this month.

SK Bioscience was spun off in 2018 from SK Chemicals Co., which controls 98.04 percent of the company. SK Discovery Co. owns a 33.47 percent stake in SK Chemicals.

The Korean vaccine maker last week struck a deal with Britain’s AstraZeneca to manufacture its experimental COVID-19 vaccine should it gain regulatory approval.

SK Bioscience’s own vaccine efforts also got a boost of confidence from the billionaire philanthropist Bill Gates, whose foundation funded $3.6 million in the company last May to develop a coronavirus vaccine.

The Microsoft co-founder, in a letter sent to South Korean President Moon Jae-in on July 20, said that if SK Bioscience succeeds in bringing the vaccine to market, it would be capable of making 200 million vaccines a year from June 2021, presidential spokesperson Yoon Jae-kwan said Sunday.

Gates also lauded Korea’s leadership in fighting the coronavirus and said the country was at the forefront of vaccine development in the private sector, Yoon said. Gates and Moon had spoken by phone in April to discuss joint efforts in addressing COVID-19 and developing a vaccine.

The RIGHT Fund was established in 2018 as a three-way partnership between Korea’s health ministry, five Korean life science companies and the Gates Foundation to fund R&D projects in vaccines, therapeutics and diagnostics to combat infectious diseases in developing countries. The fund had initially pledged to invest 50 billion won through 2022, with the Korean government to put up 25 billion won and the Gates Foundation 12.5 billion won.