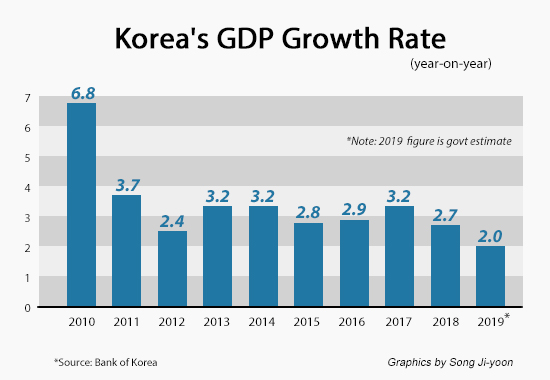 이미지 확대
The South Korean economy expanded 2 percent in 2019, the slowest annual growth in a decade due to subdued domestic demand and dwindling exports. But growth in the final quarter picked up at 1.2 percent, raising expectations for recovery this year.

Korea`s gross domestic product (GDP) in 2019 grew 2 percent from the previous year, in line with November estimates, according to the Bank of Korea (BOK) on Wednesday. This is the lowest growth since 2009 when the GDP added 0.8 percent in the aftermath of the global financial crisis.

The Korean economy experienced a surprise 0.4 percent contraction in the first quarter, but managed to stage a weak rebound, gaining 1 percent in the second quarter and 0.4 percent in the third quarter. The pace of growth picked up further in the final quarter, with the GDP estimated to have expanded 1.2 percent from the previous three months.

The rebound was mainly driven by the central bank’s accommodative monetary stance and aggressive fiscal expansion. The BOK delivered two rate cuts last year, pushing down the policy rate to a record low of 1.25 percent. The government followed with an additional $5 billion stimulus plan. 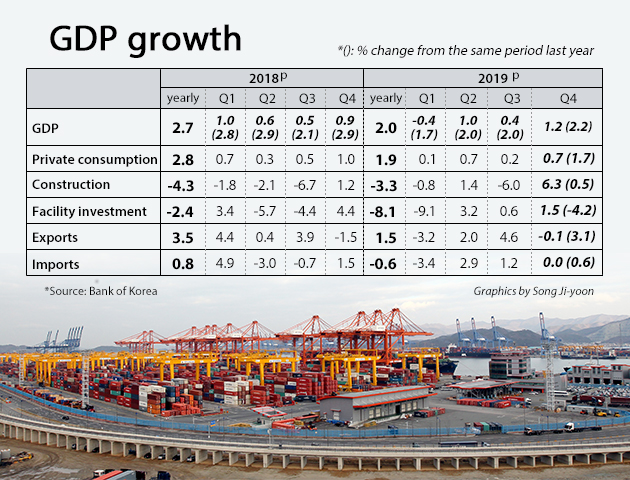 이미지 확대
Exports showed signs of a weak recovery in the fourth quarter, while private and government spending expanded and construction investment made a strong turnaround.

Outbound shipments inched down 0.1 percent as gains in machinery were offset by transportation services. While exports were down for the 13th straight month, December marked the smallest decline since April, suggesting that the worst may be over.

Private consumption ticked up 0.7 percent from the previous quarter, led by durable goods like cars and services like food and recreation. Government spending gained 2.6 percent, largely to fund the expanded state health coverage. Facility investment rose 1.5 percent on increased demand for machinery such as chipmaking equipment. Construction spending improved in both private buildings and public infrastructure projects to jump 6.3 percent.

By sector, manufacturing gained 1.6 percent on quarter, driven by machinery and equipment. Agricultural and fishery added 2.2 percent and construction 4.9 percent. The service sector rose 0.7 percent, thanks to retail and wholesale, food and accommodation, and medical, healthcare and social welfare services.