이미지 확대
South Korea’s minimum hourly wage for 2021 has been set at 8,720 won ($7.23), up 1.5 percent from this year to mark the smallest rise on record amid economic disruptions from the coronavirus pandemic.

The 27-member Minimum Wage Commission – consisting of nine representatives from labor, business and government – announced its decision at the ninth plenary session early Tuesday morning after days of fierce contest between employers and workers.

All nine labor representatives boycotted the vote. They were joined by two commissioners from the employer side representing small businesses.

Out of the 16 votes cast, nine voted in favor of the proposal and seven opposed.

A 1.5 percent rise would be the smallest since 1988 when Korea began setting the annual minimum wage through a representative panel. 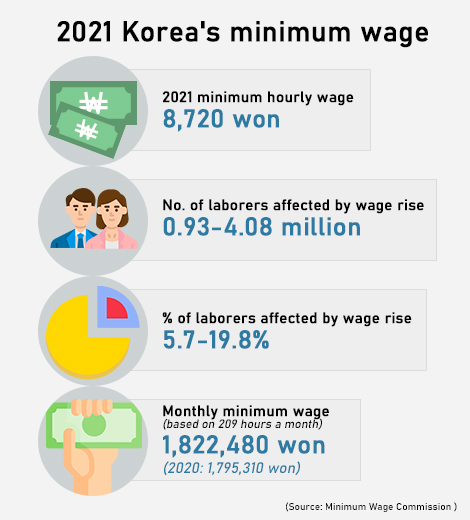 이미지 확대
Wages had increased sharply over the past three years under President Moon Jae-in’s pledge to raise the minimum hourly wage to 10,000 won during his five-year term. They were hiked 16.4 percent in 2018 and 10.9 percent in 2019, but slowed to 2.9 percent this year due to the faltering economy.

The latest talks had been rocky from the start. Employees initially called for a 16.4 percent hike to 10,000 won, while employers proposed a 2.1 percent cut to 8,410 won.

In an effort to find a middle ground, government members presented a range between 8,620 won and 9,110 won. But this did little to bridge the gaping differences as both parties diverged to the opposite ends of the proposed range.

The business side relented a little, offering a 0.52 percent raise. But laborers refused to budge and instead asked the government for a new proposal, which came to be set at 8,720 won. 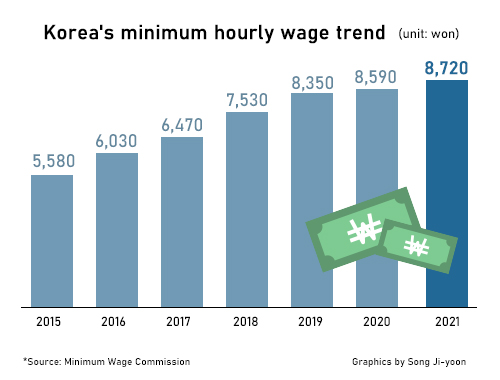 이미지 확대
The labor minister by Aug. 5 must announce the new statutory minimum wage, which would take effect from Jan. 1. Both employers and employees can appeal, and the labor minister in theory can return the bill to the commission for renegotiation.

The modest rise appears to reflect fears of an unprecedented economic downturn as the coronavirus continues to rage on in many parts of the world.

The International Monetary Fund last month projected the South Korean economy to shrink 2.1 percent this year, down from its April forecast of 1.2 percent contraction. It gave a grimmer outlook for the world economy, expecting a 4.9 percent contraction compared with a 3 percent decline predicted in April.