[Photo by Korea Federation of SMEs]

Nine out of 10 small businesses in South Korea fear disruption in their production lines as they face a graver problem from the coronavirus pandemic: dire shortage of migrant workers due to entry barriers.

Of the 1,062 companies that had signed up for overseas labor this year, 556 responded that they were “currently facing production setbacks,” according to a survey by the Korea Federation of SMEs on Monday.

The study, conducted from June 4 to 8, asked small and midsize enterprises about the impact of the delayed entry of foreign workers on their business.

About 22.7 percent of the respondents said disruption was likely within one or two months, with 13.3 percent expecting stalled activity in three to four months.

If the foreign labor situation does not improve, this means 88.3 percent of small businesses could face production constraints by early September.

Noh Min-sun, researcher at the Korea Federation of SMEs, urged the government to facilitate the entry of foreign laborers through quarantine or other means.

“If overseas infection is a concern, the government could mandate a two-week quarantine on foreign workers before they enter Korea, or at least allow companies with quarantine facilities to take in the laborers themselves,” Noh said.

Since April 1, South Korea has required all overseas entrants to be isolated for two weeks. 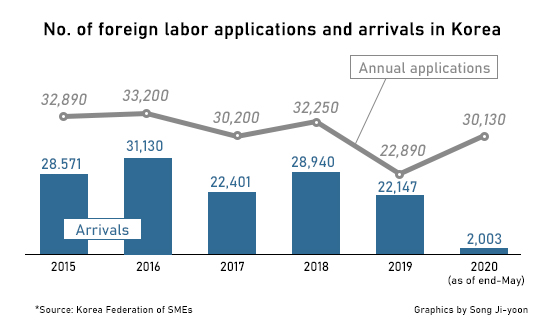 이미지 확대
Migrant workers entering Korea on an E-9 non-professional employment visa have averaged an annual 26,600 from 2015 to 2019, according to labor ministry data. But in the first six months of 2020, this number stopped short at 2,003, just 6.64 percent of the planned 30,130 workers. No foreign worker has entered the country on an E-9 visa since March 26 due to the worsening outbreak.

According to the Korea Federation of SMEs, 37,279 foreign laborers with expired visas are due to leave Korea this year.

Korea tightened its visa and entry restrictions for those from Pakistan and Bangladesh this week, after seeing a surge in COVID-19 cases imported from the two countries.

Pakistan and Bangladesh have accounted for the largest portion of imported cases in South Korea. Of the 31 new virus cases from overseas arrivals on Saturday, 16 came from Pakistan and seven from Bangladesh.

Korea is battling a new wave of infections, focused this time in the densely populated Seoul and the metropolitan area. The country last Saturday reported 69 new cases, its highest daily rise in three weeks. As of Tuesday midnight, it added 46 additional cases, with 16 locally transmitted and 30 coming from overseas.