Doosan Heavy I&C gets another $1bn, raising total state bailout to near $3 bn 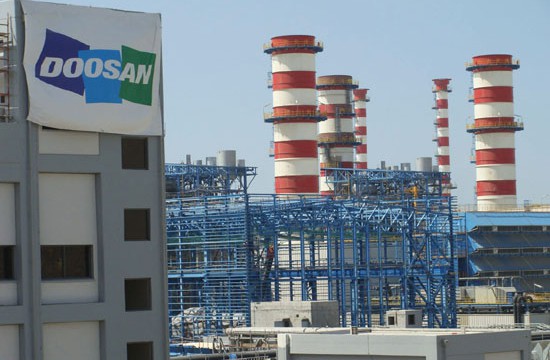 이미지 확대
South Korea’s state-owned Korea Development Bank and Export-Import Bank of Korea decided to hand out another 1.2 trillion won ($980 million) to Doosan Heavy Industries & Construction Co., which would build up their total bailout in the power equipment maker to 3.6 trillion won.

The creditors approved the additional aid plan at each meeting on Tuesday after reviewing group-wide fund-raising and rescue plans.

“The self-rescue measures announced will help improve the financial health of Doosan Heavy I&C. The creditors will closely monitor whether the company proceeds with its plans as submitted for business normalization,” said the banks.

Since March, the two state lenders have shelled out 2.4 trillion won to rescue the company faced with snowballing losses amid thinned new orders after the government cancelled new reactor projects to phase out of nuclear fuel. They gave 1 trillion won in emergency loans, 600 billion won to refinance $500 million in maturing bonds and an 800 billion won relief for working capitals.

Details about the approved plan were not disclosed.

Doosan Heavy I&C promised to secure 3 trillion won under its self-rescue plan with the sale of non-core assets. Doosan Tower, the headquarters building of the group’s holding entity in Seoul, will likely go under new owner with a golf resort and the hydraulic components unit Doosan Corporation Mottrol, on top of battery copper foil and OLED materials maker Doosan Solus Co. that has been put up for sale.

Doosan Fuel Cell and Doosan Bears reportedly were not in the list for divestiture, and nothing has been confirmed yet for the core assets like Doosan Infracore and Doosan Bobcat.

“With the financial funding, Doosan Heavy I&C is able to significantly improve financial health by repaying debt of over 3 trillion won. The company then will speed up rebuilding of business portfolio with focus on power generation using gas turbines and renewable,” the group said in a statement.