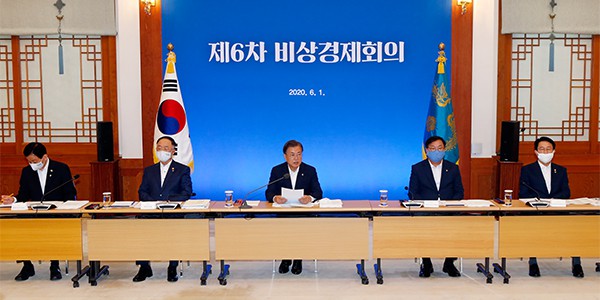 Under the second-half economic policy outline released on Monday, the government will introduce a slew of tax incentives to spur corporate investment and reshoring, even allowing big companies to run venture capital business by easing the capital investment restrictions for non-financial entities.

The moves are a dramatic shift in overall economic policy under liberal Moon Jae-in government whose focus primarily was enhancing income and working conditions for workers and imposing stricter guidelines on big companies to reduce their influence over the economy.

The government will also expand the range of corporate investments eligible for tax deductions, and give additional credits for firms that increase expenditures compared to the past three years.

In addition, the government said it would carry out a 6.2 trillion won ($5.06 billion) worth corporate investment project to encourage private sector investments to resume construction of a logistics complex in Yangjae, Seoul, e-commerce logistics center in Gwangju and liquefied natural gas facility in Yeosu that has been restricted due to regulations.

To beckon companies back home, the government will subsidize cost to establish research and development centers up to 15 billion won per location. It will remove requirements for reshoring tax benefits. Still the government fell short of lifting the capacity cap in manufacturing facilities around the capital, which companies argued as the key incentive for reshoring.

The government also allowed some access to telemedicine, but maintained the ban on remote healthcare between doctors and patients.