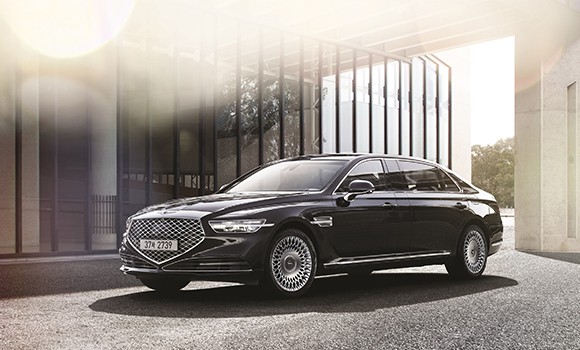 Jay Y. Lee, vice chairman of Samsung Electronics Co. and de-facto head of Samsung Group, drove into the prosecution office where he was summoned for questioning in Genesis G90, flagship luxury marquee of Hyundai Motor Co., which raised another buzz after his surprise get-together with Hyundai Motor scion Chung Euisun at a Samsung battery factory.

Lee stepped out of Hyundai Motor’s luxury sedan that stopped at the Seoul Central District Prosecutor’s Office for his questioning over illegalities in hereditary succession.

Lee is known to have appeared in G90 before. His business car from 2007 to 2015 had been Hyundai Equus sedan. It was replaced with Chairman, full-sized luxury car of Ssangyong Motor Co. in 2015 then with Genesis EQ900, mid-sized luxury sedan of Hyundai Motor in 2018.

Lee reportedly has several different cars for business use but he has been seen in Genesis G90 more often since last year, a source said.

The sight raised a buzz about new partnership between the country’s two most valuable companies.

Lee and Chung both heir apparent to the country’s top conglomerates got together at Samsung SDI Co.’s factory in Cheonan, South Chungcheong Province, on May 13 to discuss collaboration on next-generation electric car business. The two also had a tour of the manufacturing facility of Samsung SDI, secondary battery making subsidiary of Samsung Group.