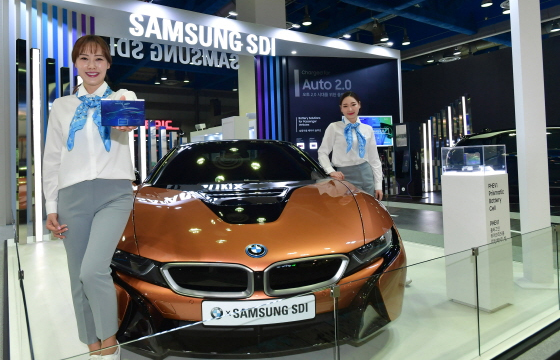 The battery-making unit of Samsung Group held a 6.0 percent share in the global EV battery market in the first quarter, climbing two notches on year to finish fourth, according to SNE Research.

According to Samsung SDI, the new battery can run more than 600 kilometers on a single charge and has a nickel content of more than 80 percent. Its boasts 20 percent higher energy density compared with its peers, while cost per kilowatt-hour is 20 percent lower. BMW is reported to be its first customer.

Samsung SDI shares finished Tuesday up 11.5 percent at 388,000 won ($314), hitting a new 52-week high. They have been on a run since last week after President Moon Jae-in vowed to include green projects in the state-led New Deal to resurrect the virus-hit economy.

이미지 확대
Samsung SDI’s performance so far has been less impressive compared to its local peers. LG Chem Ltd. rose to No. 1 in the first quarter, commanding 27.1 percent of the global EV battery market. It overtook the longtime champion Panasonic, whose share slipped to 25.7 percent. China’s CATL came third with 17.4 percent.

Latecomer SK Innovation Co. has been gaining ground by building a broad production network across Europe, China and the United States.

Samsung SDI has been more focused on profitable growth. Its Hungary unit swung to profit for the first time since operations started in 2017, netting a profit of 11.7 billion won ($9.45 million) in the quarter ended March. The company’s annual battery-making capacity is approximately 20 gigawatt hours, which is enough to power 400,000 electric cars.

The company came under spotlight earlier this month after the heads of Samsung Electronics and Hyundai Motor had a surprise get-together at Samsung SDI’s battery factory. The scions of Korea’s two largest business groups discussed a potential partnership in the development of all-solid-state batteries.

Samsung SDI supplies its batteries to some of the world’s biggest auto names including BMW, Volkswagen and Fiat Chrysler Automobiles. It expects strong sales in China as it would power Seres’ new electric model SF5 in the latter half of the year.

By Won Ho-sup and Kim Hyo-jin