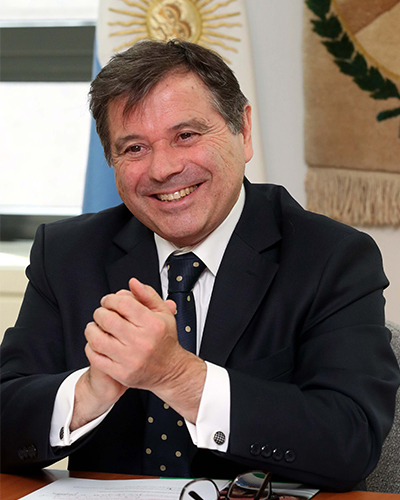 Contrary to common belief, intramuscular fat, or marbling in beef does not define prime cut as leaner cows can prove to be both healthier and tastier, according to Alfredo Bascou, Argentinean Ambassador to South Korea.

“In Argentina, due to pasture fattening methods, its levels of intramuscular fat and cholesterol are equal to and even lower than those of other meats,” Bascou said, in an interview with Maeil Business Newspaper on Wednesday in Yongsan, central Seoul. “Cows in Argentina are always outdoors, sunbathing on the plain, which makes their meat not hard, eating grass and not corn as it happens in some countries.”

Although free trade agreement negotiation between Korea and South American trade bloc Mercosur has been suspended due to COVID-19, Bascou remains an active evangelist of Argentinean beef.

Known as a gastronomist, Bascou noted that beef with lots of marbling, or fat within the lean, was once considered high-quality meat but with organic food in trend, Argentinean cow that are grass-fed on The Pampas result to “leaner, and more flavorful and nutritious beef.”

Argentina is home to 54 million cows, exceeding human population of 44 million. It is the third largest beef supplier in terms of the counts in breed after Brazil (228.3 million) and the United States (94.8 million).

Last year, Argentina shipped 831,000 tons of beef overseas, becoming one of the top 6 exporters. In 2019, beef exports accounted for 9.92 percent of its total gross domestic product.

Its domestic consumption is also notable. According to the ambassador, per capita consumption of beef in Argentina reached an average of 51 kilograms per year in 2019, which is why Bascou said Argentinean culture is a set of three – tango, beef, and wine.

“There are many Argentine restaurants interested in settling in Korea,” Bascou said. “However, until the authorization for the entry of Argentine meat is obtained, the projects will not materialize.”

Importers of Argentinean beef include China, Chile, Germany, the Netherlands, and Japan. Argentina, which exports foot-and-mouth disease vaccines to Korea, wishes to expand partnership to also include beef through bilateral cooperation and Mercosur trade bloc.

“Argentina, as a full member of Mercosur, continues to be part of all external trade negotiations, including the Mercosur-Republic of Korea negotiations,” the ambassador said.

By Kim In-oh and Lee Eun-joo