이미지 확대
The combined operating income of Kospi-listed companies in South Korea plunged more than 30 percent in the first quarter from a year ago amid virus-driven economic slowdown, and there would be worse to come in the following quarter.

The firms’ bottom line shriveled even more when excluding bellwether Samsung Electronics Co., showed the analysis released on Tuesday. Sales inched up 0.31 percent to 440 trillion won in the first quarter from a year ago, while operating income plunged 40.98 percent and net profit 61.79 percent.

Their debt ratio at the end of March also ticked up 4.58 percentage points to 117.54 percent from the end of December.

But market analysts paint an even gloomier picture for the companies’ profits in the second quarter when COVID-19 started sweeping the world at faster paces, leading several countries to lock down major cities and shut down economic activities. On top of that, the plunge in global oil prices and escalated trade and diplomatic tensions between the world’s two biggest economic powers the U.S. and China are adding to woes.

Market experts warn of a bigger shock to stock markets worldwide in the second quarter with further deterioration of their earnings.

Kim Kwang-hyun, a researcher at Yuanta Securities, said that companies’ second-quarter profit consensus is forecast to fall below 20 percent with continued downward revisions. The researcher noted that earnings will improve possibly after the third quarter of this year at very slow pace.

Companies listed in the secondary bourse Kosdaq are also struggling. 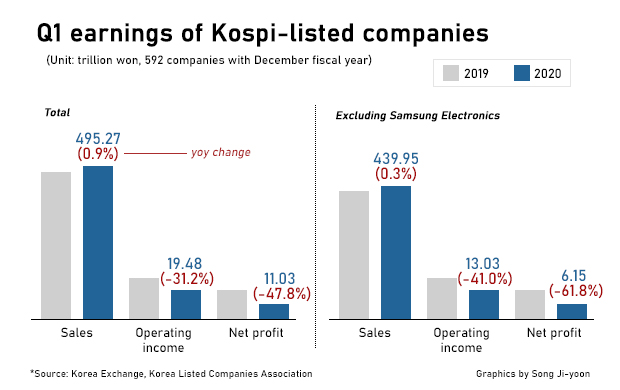 이미지 확대
Data showed that the combined operating income of 944 comparable companies whose fiscal year ended December fell 22.88 percent to 1.76 trillion won in the first quarter from a year ago. Sales on a consolidated basis increased 6.71 percent to 47.2 trillion won.

But virus has helped some companies post better-than-expected results in the first quarter.

Among information technology companies, those engaged in non-face-to-face industries such as software and service sectors saw earnings improve amid coronavirus pandemic. Sales and operating income of companies in software and service sectors that include game developers jumped 10.13 percent and 16.11 percent, respectively. Companies in entertainment and media business saw operating income soar 763.61 percent during the cited period when most people chose to stay at home to prevent coronavirus infection and spent more time on media