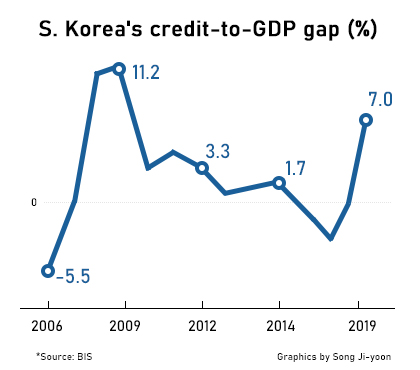 이미지 확대
South Korea showed one of the fastest gains in private-sector debt last year, raising alarm for its indebtedness as lending has surged this year due to virus woes.

Korea’s credit-to-GDP gap, the difference between ratio of a country`s national debt to its gross domestic product and its long-run trend to measure a country’s vulnerability against financial risks, reached 7 percentage points last year, up from previous year’s 6.6 percentage points, according to the Bank of International Settlements (BIS) on Sunday. The reading is the highest since 2009 when it recorded 11.2 percentage points in the aftermath of global financial crisis.

The country’s private-sector debt grew sharply last year as household debts ballooned due to overheating property market while business conditions deteriorated amid protracted trade dispute between the U.S. and China. Last year, the country’s economy grew 2.0 percent, the slowest in a decade.

Meanwhile, the country’s debt-to-GDP ratio is also rising as the government has increased debt issuance to revitalize economic recovery from coronavirus crisis. The ratio estimated to top 44 percent this year, up from last year’s 38.1 percent.

According to the International Monetary Fund’s projection, the Korean economy is expected to contract 1.2 percent this year.

By Yang Yeon-ho and Cho Jeehyun