Seoul keeps to plan of weaning the country off nuclear fuel, expand renewables to 40%

이미지 확대
South Korea on Friday kept its plan to phase out of nuclear fuel intact despite snowballing losses at state utility firms as the result, with a goal to replace energy sourcing with renewables to 40 percent by 2034 through retiring aged fossil and nuclear powered stations.

According to the ninth long-term plan announced by a working group under the Ministry of Trade Industry and Energy on Friday, the government plans to close all coal-fired power plants whose 30 years of operational years expire by 2034 and replace the fuel with liquefied natural gas (LNG). It will also reduce the number of nuclear power stations to 17 units by 2034 after a peak at 26 units in 2024.

Under the plan, the government will reduce dependence on nuclear and fossil fuel from current 46.3 percent to 24.8 percent by 2034 while expand dependence on renewables from 15.1 percent to 40 percent.

The plan was announced by a working group under the energy ministry that held 51 meetings since March to draw up the country’s basic energy supply plan. The latest announcement is a draft of the 2020-2034 plan that is established once every two years under the electricity enterprises act to stabilize energy supply. 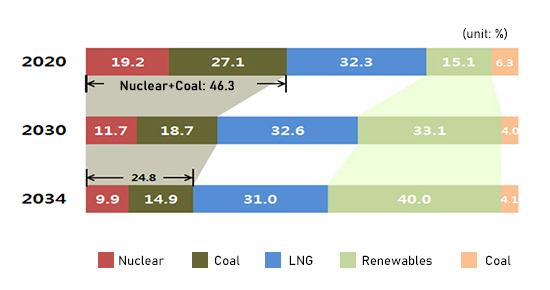 이미지 확대
The working group took into consideration that the economy would grow 2.8 percent as projected by the finance and economy ministry for short-term plan between 2021 and 2023 and 1.4 and 2.5 percent projected by Korea Development Institute for mid- to long-term projection. This year, the working group took note of 2.1 percent economic growth forecast by the Bank of Korea as it is the latest projection to be made after coronavirus outbreak.

An unnamed official from the working group said that COVID-19 definitely affects short-term energy demand but has limited effect on mid- to long-term power demand, given that in previous virus outbreaks, energy demand rebounded in the following year after the outbreak.

Energy demand numbers could change depending on the revised economic growth outlook announced in May and June, the group said.

Under the latest plan, the government plans to close all coal power plants whose operational life-cycle reaches 30 years by 2034. That would lead to operational suspension of 30 units of 60 coal-fired power plants. Of them, 24 units will be used as LNG power plants to provide stable power supply. The number of nuclear power plants is expected to hit peak at 26 units in 2024 before reaching 17 units in 2034.

Renewable energy will take up 40 percent of total power supply by 2034, up from 15.1 percent. In addition to the closing down of 10 coal-fired plants as announced during the previous roadmap, 14 additional units will shut down by 2030. The government expected to be able to reach its goal announced in July, 2018, to reduce domestic greenhouse gas emissions by 32.5 percent by 2030.