이미지 확대
Global streaming giants such as YouTube and Netflix will have to pay fees for servicing contents on Korean internet networks as the National Assembly went into lawmaking procedure to level the playing field with local players.

The Science, ICT, Broadcasting and Communications Committee at the National Assembly on Thursday approved a bill that would require multinational content providers to pay fees for using domestic networks.

Local wireless and internet content players have been complaining of overload on local networks due to surge in viewers to multinational platforms who can reap bigger profits as they do not fall under the same regulations as domestic establishments. 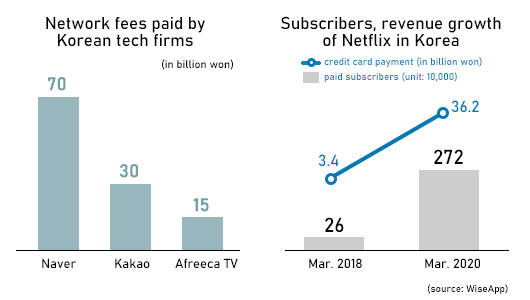 이미지 확대
The nation’s three ISPs – KT, SK Broadband and LG Uplus – have been in conflict with global content providers over the issue for many years. They argue that the global tech giants accounting for 60 percent to 70 percent of the Korean video streaming market have a free ride on their 5G networks that cost them 8 trillion won ($6.6 billion).

According to data in 2017, Korean internet portal giant operator Naver is estimated to have been charged about 70 billion won and the country’s largest messenger app operator Kakao 30 billion won a year for network use.

The Korea Communications Commission (KCC) was supposed to release a result of its arbitration between SK Broadband and Netflix over the usage payment this month, but the proceedings have been suspended after Netflix filed a lawsuit against SK Broadband last month arguing it has no legal obligation to pay network usage and upgrade fees.