이미지 확대
Order book for South Korea’s top three shipyards halved in the first quarter from the same period of the previous year as global economic demand soured from virus pandemic and may stay subdued, given the oil price crash and signs of renewed friction between the United States and China.

The amount is about 6 percent of the annual target, more than halved from 13 percent achieved a year ago. 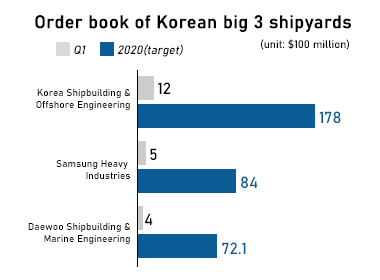 이미지 확대
The thinning in the order book has been caused by the coronavirus pandemic that has sapped demand for new vessels on concerns over a slowdown in the overall global economy. It is uncertain when orders will recover since major global clients from the United States and Europe still have their businesses closed to slow COVID-19 outbreak.

According to global marine industry tracker Clarkson Research, worldwide shipbuilding orders stopped at $2.33 million compensated gross tonnages in the January-March quarter. That was 71 percent lower from the same period last year and only one-fifth the volume recorded two years ago.

“Global trade shipments move in tandem with the global economic growth, but ship orders reflect shipment changes later,” said Kim Hyun, an analyst at Meritz Securities, in a report. “The shipbuilding industry won’t recover unless coronavirus-led impacts are resolved,” Kim said. The global shipbuilding orders for this year are estimated to plunge 33.6 percent to $50.6 billion compared to last year, according to the report.

On top of the coronavirus impact, global oil price crash is adding to worries. Korean shipyards have been preparing to vie for big liquefied natural gas (LNG) vessel orders in the second quarter, including 40 to 80 LNG carriers from Qatar, 16 LNG carriers in Mozambique, and 10 LNG carries in Russia. The combined worth of the 106 LNG carriers from the three projects is estimated to worth $21.2 billion.

Qatar already has kicked off its LNG project last month by having state-owned Qatar Petroleum sign an agreement with a Chinese shipyard in late April to reserve LNG ship construction capacity in China to support its gas expansion projects and replace older vessels. The contract is reportedly worth around $3 billion and includes 16 LNG carriers.