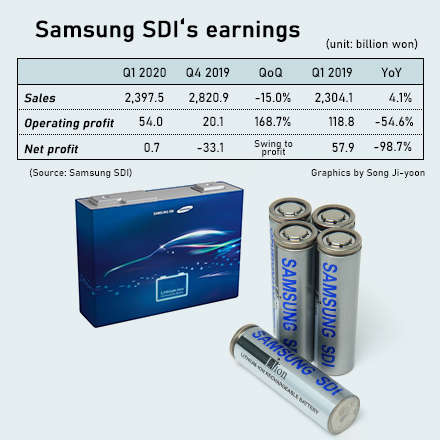 이미지 확대
Samsung SDI Co. reported a 54.6 percent on-year drop in operating profit for the first quarter and warned of worse to come as the coronavirus has just started to hit battery demand.

Earnings were down 54.6 percent from a year earlier but up 168.2 percent from the previous three months. Samsung SDI and fellow domestic rival LG Chem suffered massive one-off costs last quarter as they introduced new safety measures for their fire-prone energy storage systems.

Sales totaled 2.4 trillion won, up 4.06 percent on year but down 15 percent on quarter. It swung to a net profit of 729 million won after logging a 33 million won loss in the previous quarter. Against a year ago, net profit dipped 98.7 percent.

Sales from its battery division fell 18.8 percent from the previous three months to 1.8 trillion won. Automotive battery sales declined due to low seasonal demand, while ESS suffered from weak domestic appetite. Small cylindrical battery sales slumped as the COVID-19 impact started to bite. Sales of lithium polymer batteries were sustained on the back of new product releases from major customers.

Kwon Young-no, executive vice president at Samsung SDI, said in a conference call after the earnings report that the company would adjust its capex spending to meet fluctuations in demand amid the pandemic.

But the ramp-up at its automotive battery plant in Hungary would “continue as scheduled for now,” Kwon added, as the plan was made in advance to meet long-term orders.

Samsung SDI played down the impact of Samsung Display’s withdrawal from the LCD business. It reassured in its call that its polarizing film sales have expanded due to its diversified clientele, with more than 70 percent of its orders coming from Chinese customers.

The company expected the real impact to hit in the second quarter, with the ongoing pandemic to take a bigger toll on its small battery sales. It projected demand to gradually recover from the third quarter.