Samsung Electronics Co. kept its investment plans intact so far in the virus-dominated year, but braces for earnings decline in the coming months from the growing impact of the coronavirus pandemic after confirming near 10-percent drop in first-quarter income.

It registered 4.88 trillion won in net profit, down 6.53 percent from the previous quarter and 3.15 percent from a year earlier.

EBITDA margin, a measure of a company`s operating profit as a percentage of its revenue, was 24 percent, compared with 23 percent in the previous quarter and 25 percent a year earlier. 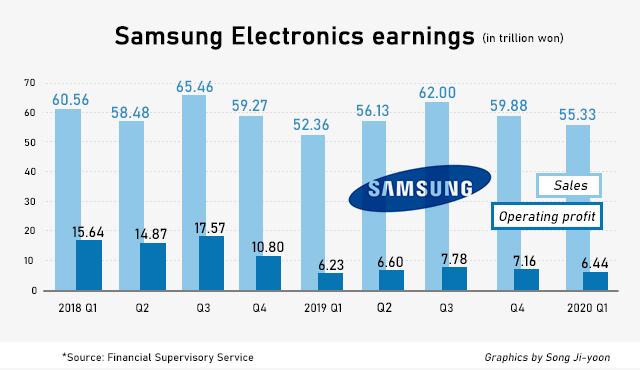 이미지 확대
The company remained conservative on its business outlook for the second quarter, citing that “COVID-19 will significantly impact demand for several of its core products.” It anticipated sales and profits of set products, including smartphones and TVs to contract “significantly.”

It expected weaker performance to continue in the second half of the year, as uncertainties from COVID-19 will persist. The fall would be sharp especially for set products like TVs due to demand slump, store closures and production suspension, said the company.

The tech company, however, projected memory business to remain solid on robust demand for servers and PCs from remote working and studying amid coronavirus pandemic.

"Even as such uncertainties persist, overall conditions in the memory industry are likely to be favorable due to server and PC demand," Han Jin-man, senior vice president at Samsung`s memory chip business, said during a conference call following the first-quarter earnings release.

Demand for DRAM was solid from data centers and PCs on the back of growth in online meetings and education amid social distancing. Mobile sector experienced softening demand due to the virus outbreak, but it was offset by major customers’ adaptation of high-density products. Mobile demand also remained relatively solid for NAND flash, thanks to customers’ growing use of high-density storage.

Inventory level stayed stable in the first quarter, according to the company. NAND flash has maintained normal level since the end of last year. DRAM inventory is expected to normalize in the second quarter.

It forecast bit growth for DRAM to stay flat in the second quarter while that of NAND flash grow by a low single-digit percentage, according to Han.

The chip giant anticipated overall memory business conditions to be “favorable” in the latter half of the year, on solid server and PC demand. But the prolonged coronavirus crisis poses risks for demand, especially for mobile, said the company.

The foundry business saw a profit decline due to slow demand for high-performance computing from China. The company plans to focus its effort on offering high-quality, high-speed products as well as expanding EUV leadership to stay ahead of its competitors, including new Chinese players, said Han Seung-hoon, senior vice president of foundry marketing team during conference call. The company plans to start mass production of 5nm productions this year.

The display panel business posted an operating loss of 290 billion won, reversed from 220 billion won profit three months earlier but narrowed from 560 billion won loss booked a year earlier. Revenue came to 6.59 trillion won, down 18 percent on quarter but up 8 percent on year.

The loss was blamed on slower sales and lower fab utilization amid weak seasonality on top of coronavirus impacts.

The company expected a further dip in mobile display earnings in the second quarter due to demand slowdown in the U.S and Europe amid prolonged coronavirus pandemic.

The company said the smartphone shipments fell as COVID-19 impacts started taking effects toward the end of the first quarter. But it managed to keep profitability sound by improving product mix with launch of premium models including Galaxy S20 and Z Flip.

The company expected weaker performance in the second quarter as the demand slowdown and store closures due to pandemic continue.

TV sales fell sharply against the previous quarter as demand declined on weak seasonality and virus outbreak. But sales of premium products like QLED, ultra-large, and 8K, increased to result in year-on-year gain in earnings. Sales of high-end home appliance, including washing machine, also improved from the previous year.

The coronavirus outbreak is expected to have impacts on its consumer electronics business, especially TVs, in the second quarter on cancellation of major sports events across the world as well as postponement of the Summer Olympic Games, said the company.

Separately, the company announced a cash dividend payout of 354 won per both common and preferred share, totaling 2.4 trillion won.