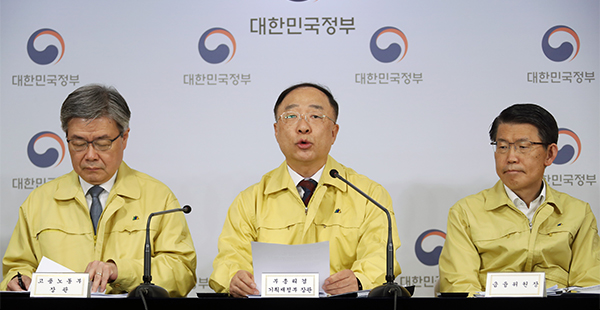 South Korea is planning a third supplementary budget for this year to support the government’s new 10.1 trillion won ($8.19 billion) worth emergency job aid that will be used in mitigating job losses accelerating during the COVID-19-driven economic crisis.

After the government’s fifth economic emergency council meeting held on Wednesday, Finance Minister Hong Nam-ki said in a news briefing that the government will propose a third supplementary budget to partly finance its new job package worth 10.1 trillion won.

Hong emphasized that it is “inevitable” to draw up a third supplementary budget for this year to finance 9.3 trillion won of the total job aid, while the government should be able to provide the rest 800 billion won in spending immediately through the government’s reserve funds, which does not require parliamentary approval.

Hong said the third extra budget would be "substantial" without elaborating its exact size, adding that it will be funded by issuing deficit-covering bonds.

The government has already announced two supplementary budgets to protect the country’s mainstay industries, boost consumption and stabilize financial markets amid worsening economic conditions due to the coronavirus pandemic. An initial emergency budget was passed in March, and another worth 7.6 trillion won was submitted for parliamentary approval last week. The last time the country drew up three supplementary budgets in a year was 1969.

The government has turned more aggressive in protecting the country’s job market after the country suffered the biggest job loss in more than a decade in March as COVID-19 landed hard on businesses both big and small amid social distancing from virus threat.

The latest aid package, which covers 40 percent of the government budget set for job protection and creation this year, is a bold investment that is expected to support 2.86 million workers, representing 2.5 times the 1.15 million unemployed in 2019, Hong said.

The government also decided to add 35 trillion won to the 100 trillion won market stabilization financial program announced last month, of which 10 trillion won will be used to support small business owners and 20 trillion won to buy corporate bonds, CPs and short-term debts from struggling companies. It will also set up a separate 40 trillion won fund to protect the country’s mainstay industries including airlines and shipping companies and have state lenders enhance their roles to address immediate distress.