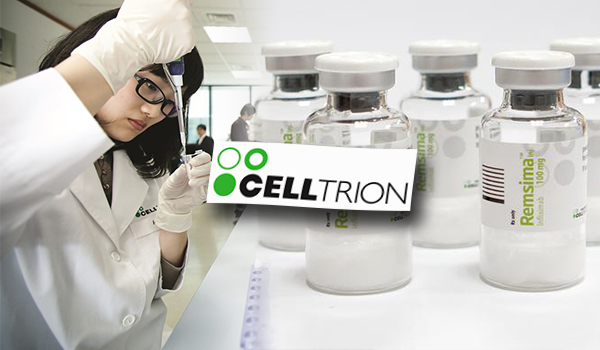 이미지 확대
South Korea’s Celltrion Healthcare Co., the distribution and marketing arm of the country’s biosimilar giant Celltrion Inc., is expanding its reach in Europe after maiden success in Turkey with direct sales of its autoimmune biosimilar Remsima.

Remsima has been fast accepted as an affordable option to replace Johnson & Johnson’s original drug Remicade in Turkey since its launch under a direct sale route two years ago. Remsima now accounts for one-third of all infliximab regimens sold in Turkey, according to IQVIA data.

Celltrion Healthcare expects Remsima’s market share to near 50 percent within this year and is confident of strong sales in the local market where its second and third biosimilars - Truxima (rituximab) and Herzuma (trastuzumab) - are on track to add a market share soon all under a direct sale model.

Celltrion Healthcare last year began the direct sale of Remsima in Ireland. It will also apply this more lucrative business model to Remsima SC, the subcutaneous version of Celltrion`s infliximab biosimilar in Germany next month and in Britain and the Netherlands in March. Celltrion received the nod from the European Medicines Agency (EMA) to sell Remsima SC last November.

With the direct marketing of Remsima SC, Celltrion Healthcare aims to cover 90 percent of the supply of the prime biosimilar agent with improved patient convenience across Europe by the end of this year. 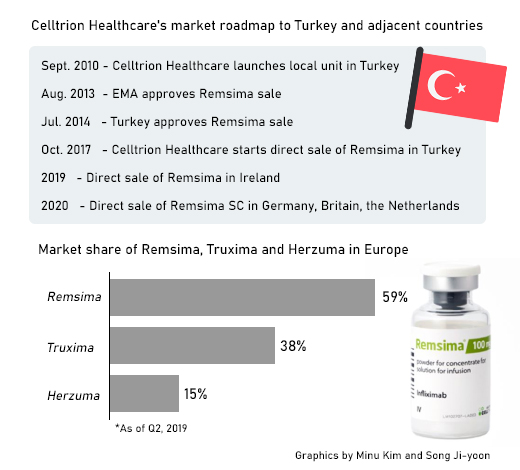 이미지 확대
Turkey was a litmus test for Celltrion Healthcare to expand its direct sale model to Europe, and marketing of Remsima SC in Europe has been prepared based on its success in Turkey, said Yoo Min-hyuk, head of Celltrion Healthcare’s Turkey business, in a recent interview with Maeil Business Newspaper.

Celltrion Healthcare established a Turkish unit in the bustling city of Maslak in Istanbul in Oct. 2017, paving the way to start a direct sale which could earn the company 20 to 30 percent more in return than sales via intermediary channels.

Korean biosimilars are now highly regarded in the Turkish medical community where some 2,000 out of 150,000 specialists are prescribing infliximab, rituximab and trastuzumab biosimilars. The market value of these three regimens is over 110 billion won ($95.3 million).

Prof. Ozgur Kasapcopur, MD, Department of Pediatric Rheumatology, Istanbul University, said he switched to Remsima from Remicade five years ago because Remsima has the same efficacy and with fewer injection site reactions.

In July 2018, the country’s scientific association of rheumatology recommended a replacement for original biological agents with their biosimilars based on sufficient clinical evidence.