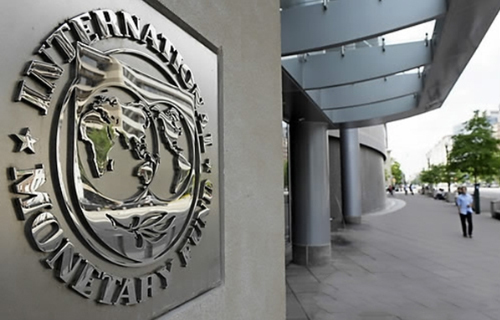 The International Monetary Fund (IMF) expects South Korea’s economy to contract 1.2 percent this year as it warned the global economy faced the worst recession since the Great Depression in the 1930s.

In its biannual World Economic Outlook report released on Tuesday, the IMF forecast Korea’s economy to shrink by 1.2 percent in 2020, slashed from 2.0 percent last estimated in October last year.

It would the country’s first contraction since 1998 in the wake of the international bailout crisis, but nevertheless outperform the global economy that is expected to fall by 3 percent in 2020 in the virus-factored IMF forecast.

“It is very likely that this year the global economy will experience its worst recession since the Great Depression, surpassing that seen during the global financial crisis a decade ago,” Gita Gopinath, the IMF’s chief economist, said in the report. 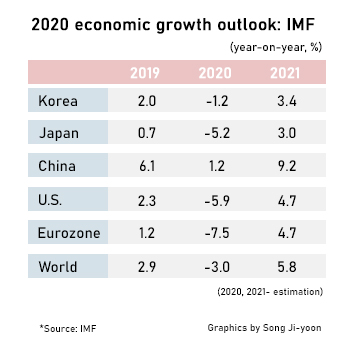 이미지 확대
Dubbing the current crisis “the Great Lockdown,” the IMF said “this crisis is like no other.” It said the Great Lockdown will cause a recession far more painful than that followed the financial meltdown a decade ago. While underlining the “severe uncertainty about the duration and intensity of the shock,” the IMF said it makes “stimulating activity more challenging” due to the required social distancing and other virus containment measures.

The IMF said it expects the growth in the advanced economy group to retreat 6.1 percent this year and developing economies 1 percent. It suggested the euro zone economy to shrink by 7.5 percent this year, the United States 5.9 percent, and Japan 5.2 percent.

The IMF’s chief economist said the cumulative loss to the global GDP could amount to $9 trillion over this year and next year from the pandemic crisis, which is more than the economies of Germany and Japan combined.

Kim Yong-beom, Korea’s vice finance minister in a Facebook post on the same day said “the IMF’s projection (for Korean GDP growth) is far below the estimates by global investment banks, and this gives us a forewarning about the possibly worst economic recession since the Great Depression.”

“The small relief for Korea is that its growth outlook looks less grim than that for OECD peers,” said Kim.