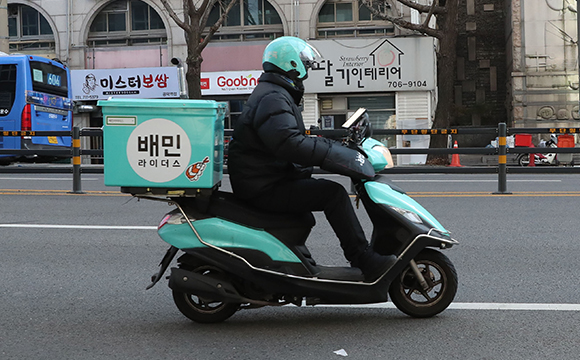 The new fee structure of South Korea’s top food delivery app Baedal Minjok has drawn strong fury from member restaurants and may influence the antitrust agency’s approval of the buyout of the app operator Woowa Brothers by Germany company Delivery Hero, which dominates other leading food delivery platforms in Korea.

Baedal Minjok last Wednesday revamped its fee structure, expanding its fixed-rate system by lowering the commission rate from 6.8 percent to 5.8 percent per order. It instead limited the number of advertising banners that restaurant owners can buy to three a month.

Woowa Brothers argued the new fixed-rate system was to ensure “fair competition” as big restaurants in the past had dominated the app, buying hundreds of banners that cost 88,000 won ($71) each per month.

It said the commission rate was trimmed from 6.8 percent to 5.8 percent to reduce the burden of restaurant owners. The 5.8 percent fee is also cheaper compared to other delivery apps, it added. For instance, the No. 2 delivery app operator Yogiyo charges restaurants a fee of 12.5 percent on sales.

The commission fees of local online malls averaged 13.1 percent based on Fair Trade Commission study last December, the company noted, adding that its 5.8 percent rate is less than half the industry average.

Small restaurant owners, however, argued that 47.2 percent of businesses would be subject to bigger costs from the new pricing system and that the only restaurants to benefit are those with monthly sales of less than 1.55 million won.

The Fair Trade Commission (FTC) said it would “take the latest move into consideration during its merger approval review” of Delivery Hero and Baedal Minjok.

Last December, Delivery Hero offered to buy an 87 percent stake in Woowa Brothers for $4 billion. The Germany-based delivery giant already owns two other Korean delivery apps Yogiyo and Baedal Tong, which have a market share of 33.5 percent and 10.8 percent, respectively. When combined with Baedael Minjok, which holds about 55.7 percent of the Korean market, Delivery Hero would control nearly 100 percent of Korea’s delivery app market.