Korean M&A market to see another bullish run in 2020 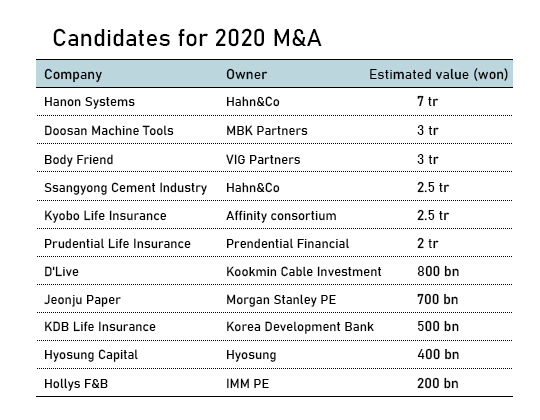 이미지 확대
The Korean M&A scene will stay hot this year, although subdued from last year’s record number amid ongoing restructuring against protracted slowdown and transition to the new digital age.

According to sources from the investment banking industry on Thursday, a combined 23 trillion won ($19.8 billion) worth Korean business assets are expected to join the sale block in 2020, including multi-billion-won worth Hanon Systems, Doosan Machine Tools and Prudential Life Insurance.

The 23 trillion won value is almost half of the 45.3 trillion won deals conducted in Korea last year, according to Maeil Business Newspaper.

Prudential Life Insurance will be the first to arrive on the market worth more than 1 trillion won.

Another mega deal in the pipeline is Hanon Systems, an automotive thermal system provider in which local PEF Hahn & Co. owns a 50 percent stake. Multiple securities companies have inquired when the PEF would be placing its stake on the market. The PEF is carefully considering the timing of the sale because the company is expected to reap sound profits this year. Market experts estimate the stake could value at least 7 trillion won.

Next in the list is Doosan Machine Tools acquired by MBK Partners in 2016 that could fetch around 3 trillion won. The PEF put the machine tool manufacturer on the market last May after tapping Bank of America Merrill Lynch financial advisor but the sales progress has been delayed.

Market experts also expect the insurance industry to see many consolidations and company sales this year amid business slowdown caused by low interest rate and weak economic growth. The-K Non-life Insurance and ABL Life Insurance are among the sales candidates.

By Park Jae-young and Choi Mira