이미지 확대
South Korea’s consumer sentiment in March dropped to levels last seen during the 2008 financial crisis amid fears of the coronavirus pandemic.

The composite consumer sentiment index fell 18.5 points from the previous month to 78.4 in March, the weakest since March 2009 when the global community grappled with a financial meltdown, the Bank of Korea (BOK) survey showed.

All economic and household financial status indicators worsened due to the rapid global spread of COVID-19, which is weighing on broad consumer sentiment, said Kwon Cheo-yoon, statistics research team manager at the BOK. 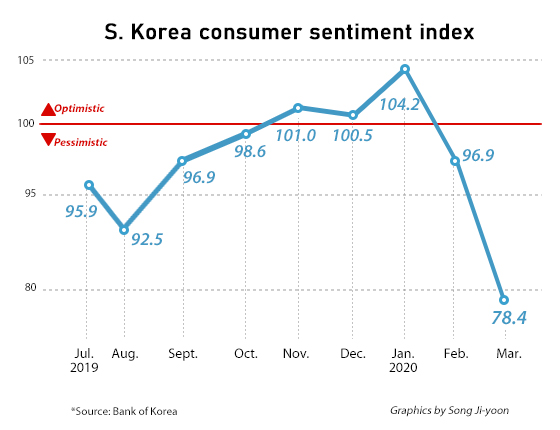 이미지 확대
While the number of new infections in Korea has now slowed to about 100 a day, the highly contagious virus continues to rage across the United States and Europe, with the U.S. now overtaking China in confirmed cases.

The index representing the state of current livelihood and future livelihood conditions both slid 8 points and 10 points, respectively.