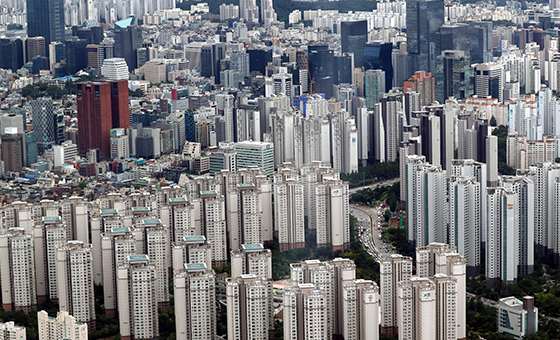 이미지 확대
The number of foreigners buying up homes in South Korea has been on a steady rise over the last five years with Chinese nationals making up nearly half of such home transactions.

According to Korea Appraisal Board’s report to a lawmaker of main opposition Liberty Korea Party, foreigners have purchased 13.2 trillion won ($11.4 billion) worth residential properties in Korea from 2015 to September 2019. They accounted for only 0.76 percent of the country’s total home sales over the cited period but their share in the entire Korean property market jumped to 0.86 percent 2019 from 0.64 percent in 2015.

Market observers attributed the recent surge in foreigners’ demand for Korean homes mainly to the skyrocketing local housing prices despite the Korean government’s introduction of a slew of measures to rein in the speculative housing market.

By nationality, Chinese purchased 5.98 trillion won worth homes in Korea, accounting for 45.2 percent of total housing purchases made by foreigners in the recent five years. The second largest buyers were Americans with 3.78 trillion won, followed by Japanese with 227.2 trillion won.

Chinese home buyers most preferred Bucheon and Ansan, satellite cities near the country’s capital Seoul. They are located southwest of Seoul with clusters of small manufacturing companies, which hire many foreign workers.

Previously, Chinese had mainly purchased cheaper multi-unit houses and studio apartments but their demand for newly built private apartments also has been rising recently, said a government official from Ansan.

Americans and Japanese mostly bought houses in affluent Gangnam area and Yongsan district of Seoul. Of the American buyers, Korean Americans make up a majority, according to a real estate market researcher at KB Kookmin Bank.

By Na Hyun-joon and Cho Jeehyun