이미지 확대
The showdown between the management versus challenging shareholders’ alliance at Korean transportation giant Hanjin Group and parent of flag carrier Korean Air Lines has turned complicated, sprawling into mutual court suits and complicating matters for the rest of the shareholders as the moment-of-truth general assembly comes later this month.

Hanjin KAL, the group’s holding entity currently under the control of chairman Cho Won-tae, said in a public disclosure on Tuesday that it has requested the Financial Supervisory Service (FSS) to look into the validity of voting shares held by Bando Engineering & Construction (Bando E&C), claiming that the builder falsely disclosed its intention of stock ownership in the transportation holding company as simple investment although its true intention was management control.

It is also demanding Bando E&C to dispose 3.28 percent stake in Hanjin KAL, or those exceeding the 5 percent limit for simple investor.

Bando E&C is a member of the three-way alliance led by Cho’s older sister Hyun-ah. The alliance holds a 32.06 percent stake in Hanjin KAL with Bando E&C 8.28 percent, which will be countable at the upcoming general shareholders meeting on March 27. The defending chairman should fight against the union with 32.45 percent that combines shares of his backers including other family members, Delta Air and Korean Air Lines employee union.

When Bando E&C upped its stake ownership in Hanjin KAL in October and December, it disclosed the purchase to own the shares was simple investment. But it changed its purpose of holding the 8.28 percent stake to management participation in a regulatory filing on Jan. 10.

Hanjin KAL, defending the current leadership of Cho Won-tae, argues that Bando E&C already had intention to influence the management of Hanjin KAL when it started increasing shares in the transportation holding company since August last year, not as a simple investor. It asserted that Bando E&C’s chairman in his meetings with Cho Won-tae and his mother, who owns a 5.31 percent stake in Hanjin KAL, demanded rights to appoint Hanjin Group’s honorary chairman and senior executives as well as a real estate development rights. 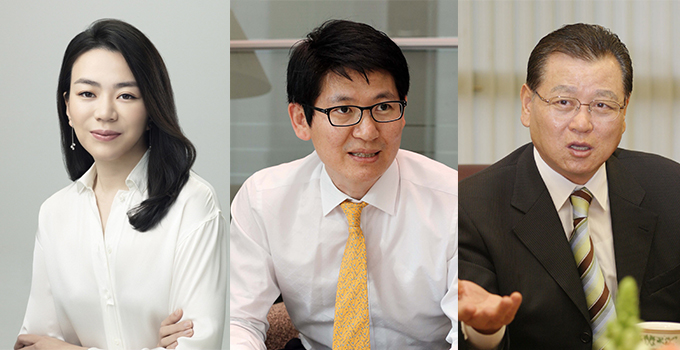 Bando E&C has denied the accusation, saying that it was Cho Won-tae who first asked for help.

It said last year’s share acquisition was purely for investment purpose, adding that the heads of the two companies met a few times even in July last year.

If the FSS finds the partial share of Bando E&C in Hanjin KAL invalid, the engineering company’s voting power in Hanjin Group’s upcoming shareholders’ meeting would be cut down.

In a counterattack, KCGI filed a lawsuit, asking the court to appoint an inspector for fair proceeding of the general shareholders meeting on March 27.

On Monday, KCGI disclosed it has bought additional Hanjin KAL shares, pushing its total stake in the holding company to 18.68 percent.

The challenging front led by Hanjin Group heirless has increased their combined stake in Hanjin KAL to 40.12 percent so far, with Bando E&C also raising its holdings to 14.95 percent through additional purchases this year. But the shares newly acquired after the end of December last year will not be counted at the upcoming shareholders meeting.

Separately on Monday, local proxy advisory firm Sustinvest gave its blessing on the opponent team by recommending shareholders to vote against extending the board term of Cho Won-tae as the company’s chief.