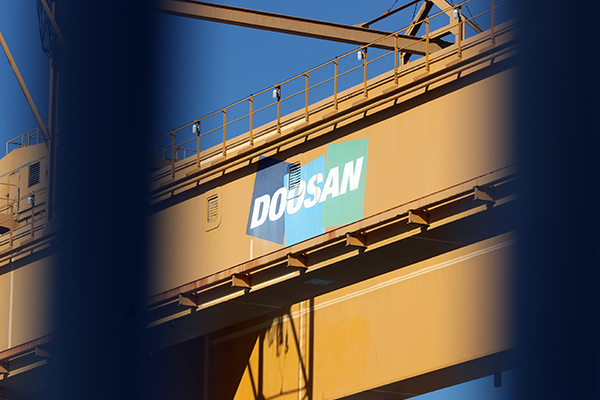 The company has been virtually out of work after the government in 2017 announced suspension of new reactors and retirement of aged generators to phase out of nuclear fuel altogether.

The state-led construction project for Shinhanul 3 and 4 reactors was first drafted as part of the government’s fourth basic plan for power supply in 2008 and approved under the electricity business law in February 2017.

“Doosan Heavy expected the construction of the six new nuclear power plants would bring 10 trillion worth new orders,” said Chung Beom-jin, a Kyunghee University professor. “The company would never have thought the government would totally scrap the plan.”

이미지 확대
The Korean power plant equipment maker already was pained by the bankruptcy of U.S. nuclear power company Westinghouse Electric in 2017. The company had planned to supply core equipment for Westinghouse’ nuclear construction projects but the American firm filed for bankruptcy protection in March 2017. Chung said Doosan Heavy’s two core businesses in the nuclear energy portfolio had simultaneously taken a fatal blow due to the nuclear phase-out initiative of the Korean government and the bankruptcy of Westinghouse. The company, in the end, posted 420 billion won and 100 billion won in net loss in 2018 and 2019, respectively, despite the brisk performance of its subsidiaries including Doosan Infracore and Doosan Bobcat.

Industry sources found that Doosan Heavy’s partners and subcontractors struck a combined 1,105 new deals last year, down by 46.1 percent from the previous year. Industry experts lamented the collapse of Doosan Heavy is like losing the country’s reputation as a nuclear energy powerhouse for the past 50 years.

The company laid off more than 1,000 employees and cut the number of management by half over the last three years amid the protracted liquidity woes and profitability loss. Last month, it announced a plan to sell Doosan IMGB in Romania, the manufacturer of power generation systems, industrial machinery and castings and forgings.

Doosan Heavy took over the Romania’s largest castings and forgings plant with an annual capacity of 140,000 tons in 2016. The factory was supposed to become Doosan Heavy’s overseas materials manufacturing hub, but the company in the end decided to withdraw the business that logged losses for many years amid global slowdown in power generation industry.