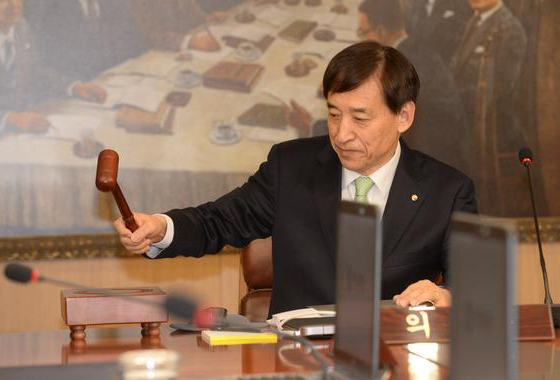 South Korea’s central bank alerted Friday that it could hold an extraordinary monetary policy meeting to deliver rate action before the April 9 regular meeting, after Korean capital markets were battered by panicky selloff.

“Members of the monetary policy committee have discussed the need to hold an extraordinary meeting,” the Bank of Korea (BOK) told reporters Friday morning.

A monetary policy meeting beyond the calendar schedule can be held upon the call from the central bank governor or request from more than two members on the committee.

If held, market watchers anticipate the meeting to take place around Wednesday next week.

The last time the BOK held an extraordinary meeting was in October 2008 during the height of the global financial crisis, when it slashed the interest rate by a stunning 0.75 percentage point. In September 2001 after the U.S. terrorist attacks, it also announced an emergency rate cut of half a percentage point.

Markets estimate the central bank to lower the benchmark rate by 0.25 to 0.50 percentage point this month.

The U.S. has already slashed rates by half a percentage point earlier this month in its first emergency cut since 2008. The U.K. followed suit, cutting its benchmark rate by 50 basis points this week.

Global markets continue to tumble due to mounting fears over the coronavirus pandemic.

Korea’s benchmark Kospi opened Friday down more than 8 percent, triggering a temporary halt on the main bourse. It closed the day 3.43 percent lower at 1,771.44.