이미지 확대
South Korea added 400,000 jobs for the third straight month and the employment rate hit a record high in February as the sprawling spread of the new coronavirus bumped up healthcare and delivery hires.

The Statistics Korea reported Wednesday that the number of employed totaled 26,838,000 in February after adding 492,000 new jobs from a year earlier. It is the third consecutive month with payroll gains in more than 400,000, although slowed from 568,000 additions in January.

“The coronavirus outbreak is starting to show its impact on the job market,” said Eun Soon-hyun, a Statistics Korea Official. The restaurant and hospitality sector added 14,000 jobs but the growth slowed sharply compared to the recent months due to a plunge in foreign visitors to the country after COVID-19 outbreak. Meanwhile, shipping and warehouse sector saw a sharp growth on jump in delivery orders and online shopping as people keep social distancing to prevent the spread of the virus, said Eun. 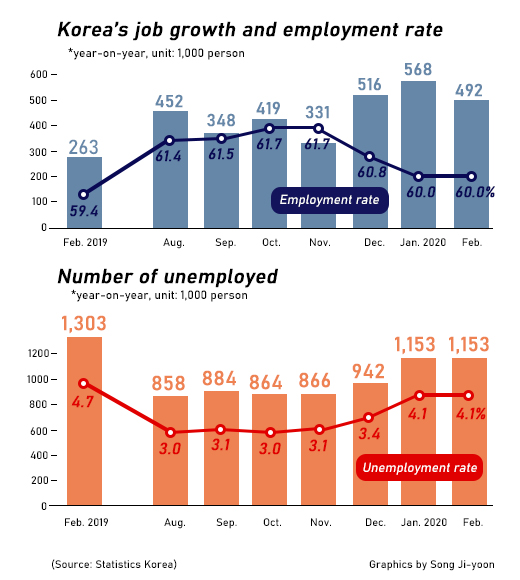 이미지 확대
The number of workers on temporary leave grew by 142,000 from a year earlier to mark a 29.8 percent jump as government hires of seniors were suspended during virus spread and workers were forced to go on a leave as cost-saving measures.

The employment rate rose in all age groups except for 40s and 20s, which fell 0.5 percentage point and 0.8 percentage point, respectively, on year. It was the 25th straight month for the figure for 40s to slip.

The youth employment rate for aged from 15 to 29 was 42.9 percent, the same as a year earlier.