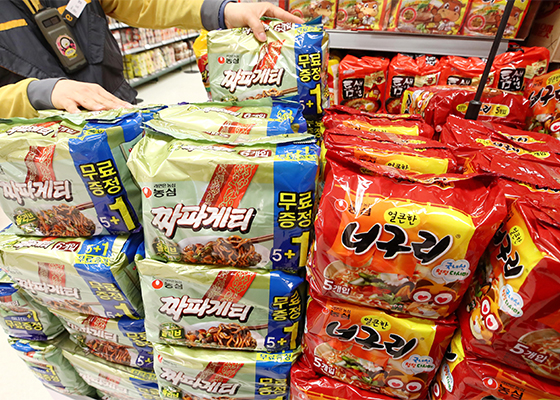 South Korean food maker Nongshim Co. is expected to see 23 percent jump in earnings this year on stocking of instant noodles amid coronavirus scare at home and jump in overseas demand from its label exposure at Oscar-winning movie “Parasite.”

A market consensus compiled by local market tracker FnGuide projected that Nongshim would record an operating income of 97.2 billion won ($80.8 million) on sales of 2.5 trillion won on a consolidated basis this year. It would be a jump of 23.4 percent and 5.6 percent, respectively, from last year.

NH Investment & Securities is even more positive about the company’s performance outlook, estimating 101.8 billion won in operating income for this year. The brokerage revised up the price target for Nongshim shares to 350,000 won apiece last week from 320,000 won.

Hi Investment & Securities even set the target at 380,000, up 23 percent from earlier figure.

The rosy outlook stems from an increase in ramyeon sales at home and abroad.

The company generates more than 60 percent of its sales from the instant noodle business but has confronted growing challenges from intensifying rivalry.

The coronavirus outbreak, however, has worked as a boon for the company as people have been stocking up instant noodles as long-lasting food supply amid coronavirus hysteria.

Moreover, Nongshim’s offshore instant ramyeon sales is on a steady rise, growing 10.2 percent on average every year since 2015 to reach $810 million last year on the back of the popularity of Korean pop culture.

The Oscar-sweeping film “Parasite” has also given a boost to the company’s offshore ramyeon business. The movie featured Chapaguri, a mix of the ramyeon maker’s black bean noodle Chapagetti and spicy noodle Neoguri, and stirred up the curiosity of people around the world for the food.

In response to the growing overseas demand, Nonshim is readying to build a second factory in California by investing $200 million. The new factory is scheduled to start operation next year or 16 years after it first began production in the U.S.