이미지 확대
Monthly domestic car sales by South Korean automakers dipped to the lowest in 11 years in February, with manufacturing disruptions from epidemic outbreak expected to damage sales by more than $3 billion for Hyundai Motor Group in the first quarter and upset the entire automotive supply chain.

Sales took a dive despite longer working days against the same month a year ago when the Lunar New Year holiday fell.

Its sibling Kia Motors saw its sales down 5 percent on year to total 187,844 vehicles with domestic sales sliding 13.7 percent to 28,681 units against a year ago. Overseas sales retreated 3.2 percent to 159,163 units during the period. 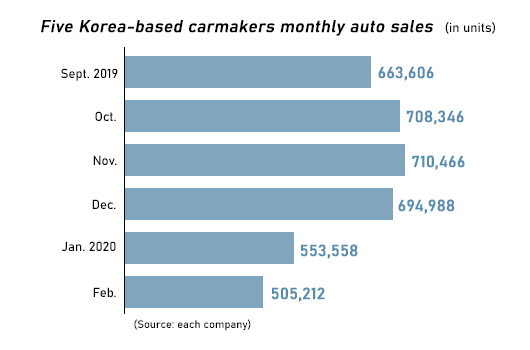 이미지 확대
Poor sales on top of production disruption due to virus attack will cause huge dent on the first-quarter income statement.

Hyundai Motor had to stop Porter truck-making plant in Ulsan on Feb. 24 and the Ulsan 2 plant responsible for popular SUVs during the weekend after employees tested positive to COVID-19.

The suspended production is estimated to have disrupted output of 120,000 units in total.

The one-week shutdown of domestic lines could affect manufacturing of 34,000 Hyundai Motor vehicles and 29,000 Kia Motors cars, according to Korea Investment & Securities. Production disruption for three weeks could shave 2.4 trillion won ($2.01 billion) in sales for Hyundai Motor and 1.5 trillion won for Kia Motors.

“Outlook is much dimmer, give the dismal business in China,” said Kim Jin-woo, analyst at Korea Investment & Securities. China is the world’s biggest auto market and has a majority of auto parts factories that supply to most global car makers. But the country had to stop factory operation from end-January to mid-February, causing severe auto parts supply disruptions.

The country’s leading tire maker Hankook Tire Co. halted some manufacturing lines in Daejeon and Geumsan for two days until Monday. A combined 37-40 million tires are produced at the two factories, which take up 36 percent of its total year output.

Nexen Tire Corp. also shut down its Changnyeong plant in South Gyeongsang Province on Sunday and Monday after an employee tested positive for the virus on last Friday. Operation started early Tuesday morning.