이미지 확대
South Korea’s fertility rate fell to a fresh low of 0.92 in 2019, mired in the zero territory for two years in a row.

According to data released by Statistics Korea on Wednesday, the nation’s total fertility rate – the average number of children a woman is expected to have in her lifetime – dropped to 0.92 in 2019 from 0.98 in the previous year. The tally dipped to the lowest point since the agency began collecting the data in 1970.

South Korea was the only country in the Organization of Economic Cooperation and Development (OECD) that had total fertility rate below 1 for two consecutive years.

The childbirth tally is far below than the replacement level of 2.1 births per women that would keep the nation’s population stable. 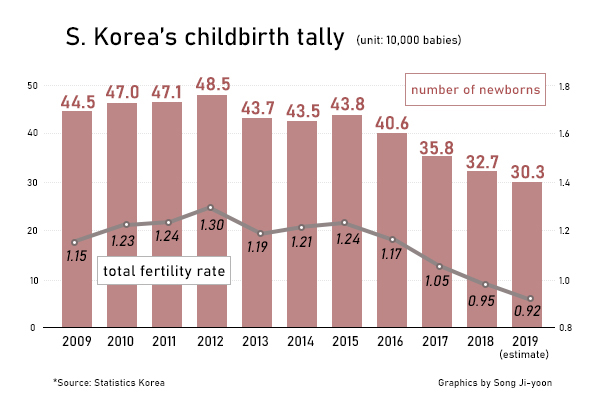 이미지 확대
“A total fertility rate falling below 1 means that the number of newborns would be cut in half from the current level in the next generation,” said Kim Jin from the statistics bureau. “The rapid increase in the elderly population compared to the steep fall in the number of newborn babies would further accelerate the aging pace in the society.”