이미지 확대
The much-awaited rebound in South Korean exports may not come easy as export prices slid back in January to hit the lowest in more than three years, even without the new virus outbreak setback.

The export price index slipped 0.8 percent on month to 96.59 in January, after a brief uptick in the previous month, according to the Bank of Korea on Friday. This was the lowest since January 2016 when it stood at 93.46.

Against a year-ago period, it fell 2.7 percent, down for the eighth straight month.

The results were not impacted by the new coronavirus, which surfaced in Wuhan, China late last year and started spreading to other countries from late January. 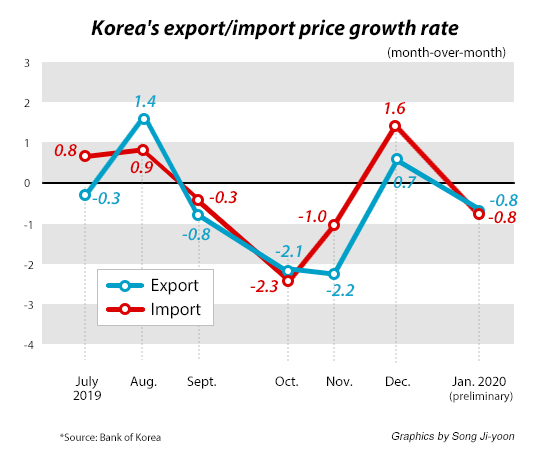 이미지 확대
The won strengthened 1.0 percent on month against the U.S. dollar to 1,164.28 in January, pushing down overall export prices.

Prices of DRAM memory chips, a main export item, plummeted 41.4 percent from a year earlier, extending their losing streak for the 13th month in a row. As a result, prices of computers, electronic and optical devices edged down 0.7 percent. But when excluding the currency effects, prices rose 0.2 percent.

The import price index in January also fell 0.8 percent from the previous month to 107.95 on soft oil prices. Against a year earlier, it rose 2.7 percent, up for the second straight month.