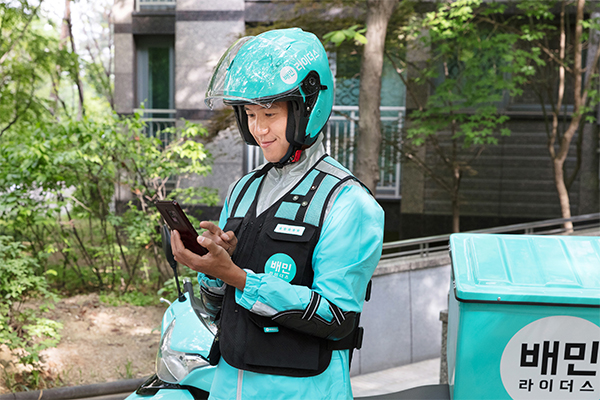 이미지 확대
Delivery gigs are becoming an appealing side hustle for young Koreans in a tough job market.

Woowa Brothers Corp., owner of Korea’s top food delivery app Baedal Minjok, said the number of Baemin riders, or full-time delivery drivers, more than doubled from a year ago to 2,283.

The number of Baemin connectors, or people that make deliveries on the go to make some extra cash, jumped as much as 245 times to 14,730 in just six months, it added.

The company said it is being flooded by calls from eager prospective drivers. In December 2019, it received 1,119 phone calls, up from 524 in the previous month.

“We sometimes get as many as 400 calls a day,” said Kim Ki-min, recruitment team manager of Baemin riders. “Calls for information on Baemin connectors have become so overwhelming that we’re now informing them through other routes such as part-time job listing sites or social networks.”

In the second half of last year, 2,600 new riders and connectors joined Baedal Minjok on average a month, or 100 every day.

Woowa Brothers said this rise in popularity comes as demand for food delivery has jumped by about 8 percent due to the coronavirus outbreak.

The job’s handsome pay and flexible working hours are appealing to the young. 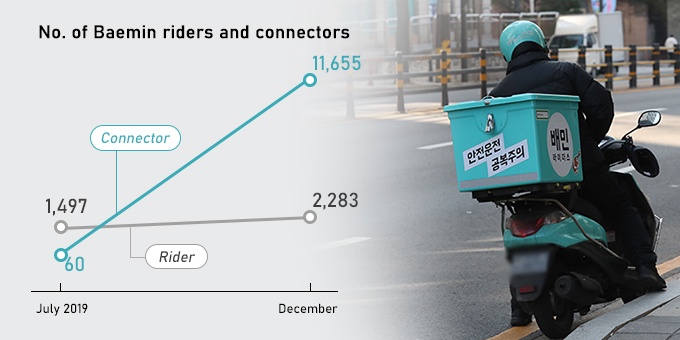 Both riders and connectors can work flexible hours by simply opening the app to start and shutting it down when they want to call it a day. They are also free to work for other delivery platforms at the same time.

Woowa Brothers said it has an insurance to cover all of its riders in the event of an accident. It has also packaged a separate insurance for drivers of bikes and motorcycles.

In December, Woowa Brothers was bought by Delivery Hero for $4 billion, marking the German food delivery giant’s push into the fast-growing Asia market.

By Shim Hee-jin and Kim Hyo-jin