Korean exports on Feb 1-10 up sharply on year, but negative in daily volume 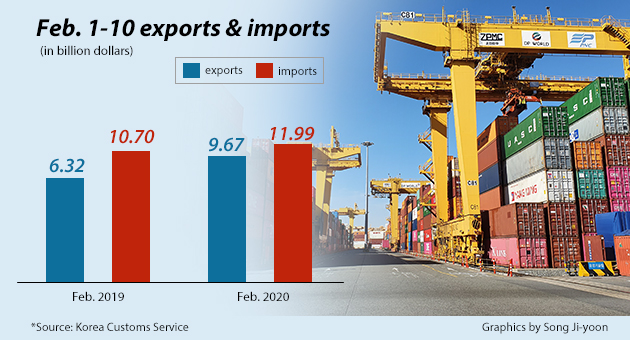 이미지 확대
South Korea’s exports in the first 10 days of February showed a whopping rebound against a year-ago period with fewer working days. But whether the month can snap a 14-month-long losing streak is yet to be seen, given the impact on shipments from the spread of a novel coronavirus disease that stopped production at Korean carmakers and other factory lines.

The country’s exports from February 1 to 10 totaled $10.7 billion, up 69.4 percent from the same period last year, according to data released by the Korea Customs Service on Tuesday. The sharp uptick owed largely to three more working days compared to last year with changes in dates of Lunar New Year holidays. Average daily exports fell 3.2 percent to $1.53 billion with the number of working days factored out.

Imports in the first 10 days of February gained 24 percent on year to $12.0 billion, leading to a trade deficit of $1.3 billion.