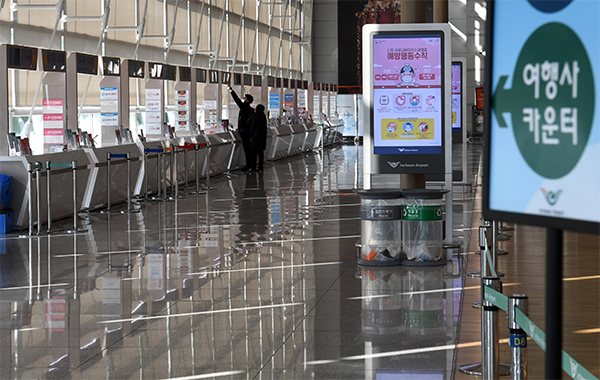 The South Korean tourism industry has turned to the government for aid to prevent chain bankruptcies as short-haul travel has virtually come to a stop due to the spread of coronavirus originating from China.

The Korea Association of Travel Agents (KATA) last week asked for government support to offset the industry’s ballooning losses from a slew of travel cancellations since the novel coronavirus outbreak. It sought for relief during the outbreaks of severe acute respiratory syndrome (SARS) in 2003 and the Middle East Respiratory Syndrome (MERS) in 2015.

During the MERS epidemic, the government provided special funding of 70 billion won ($59.1 million).

The local travel industry with snowballing losses from cancellation of travel plans turned panicky upon news that the country’s leading charter travel agency HotelnAir.com may go insolvent. The company is said to be preparing to shutter the business amid waning travel demand. Industry insiders forecast the worst-case scenario would occur for the industry if the mood remains unchanged until the end of March.

Losses would be snowballed when including anticipated trip cancellations from or to China in March and April, as well as canceled trips from or to Southeast Asian countries and Japan, and if demand keeps waning or stays at the current level in upcoming months.

Most of travel agencies are already in danger of business shutdown, industry insiders warned. 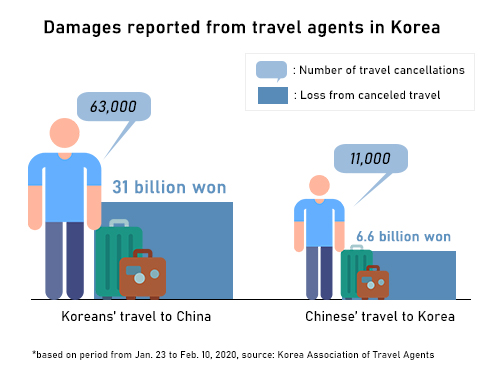 이미지 확대
Freedom Travel Co., which incurred losses of some-1 billion won for the past two quarters each amid consumer boycott against trips to Japan, reported damages of 2 billion won in travel cancellations since the recent virus crisis.

It has borrowed 8.1 billion won from parent Mode Tour and also has to pay off current liabilities of 20 billion won within a year from now. The company is now offering voluntary retirement to employees.

Mode Tour and Hana Tour, Korea’s top two travel agencies, are not safe, either, reporting 10 billion won in damage from cancellations. Both companies started operating on emergency mode last week and kept up efforts for cost reduction such as through voluntary unpaid leave and reduced work hours and days. Another agency KRT has made employees to go on a rotational one-month unpaid leave in February.

According to government data, four small travel agencies have so far reported a voluntary business closure since the Lunar New Year break in Korea.

The Ministry of Land, Infrastructure and Transport announced its supportive measures for the struggling tourism industry a day earlier on Monday. Airliners under the government scheme will be allowed to change their business plans to add alternative routes and run irregular flights on demand.

The ministry also is reviewing other measures such as the delay or reduction of payment for airliners’ use of airports and related facilities.

Eight of the country’s nine airlines operate 162 flights to China per week as of the second week of February, sharply down from 546 flights on 59 routes in the beginning of January.