Government revenue for the fiscal year 2019 totaled 402 trillion won ($337.3 billion), while spending reached 397.3 trillion won, according to the Ministry of Economy and Finance on Monday.

Tax revenue came to 293.5 trillion won, down 100 billion won from the previous year to post its first decline in five years.

Park Sang-young, a tax department official at the finance ministry, said the grim results were largely due to poor earnings of chipmakers from the prolonged industry downturn. 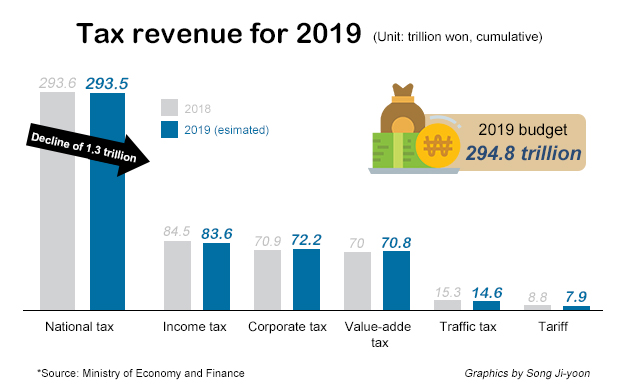 Park noted that the government’s tax rebates for the low-income class were also to blame for the poor tax earnings.

Despite the surge in home prices, real estate tax collections turned out weaker than expected, off 170 billion won from the 2.85 trillion won target.

The government projects corporate tax earnings for this year to be 64.4 trillion won, down 8 trillion from 2019, but experts say even this target is “too optimistic.”

Their biggest worry is the economic fallout from the unexpected coronavirus outbreak, which is threatening to disrupt businesses that depend on Chinese factories to keep their supply chains going.

The fiscal balance is likely to worsen if the government ramps up spending in the run-up to the April general elections. Finance ministry data shows that in the January-November 2019 period, the government ran an overall fiscal deficit of 7.9 trillion won, the largest since the global financial crisis in 2009 when it logged a deficit of 10.1 trillion won. Operational budget deficit also swelled to 45.6 trillion won, the biggest since the ministry started compiling the data in 2011.

By Yang Yeon-ho and Kim Hyo-jin