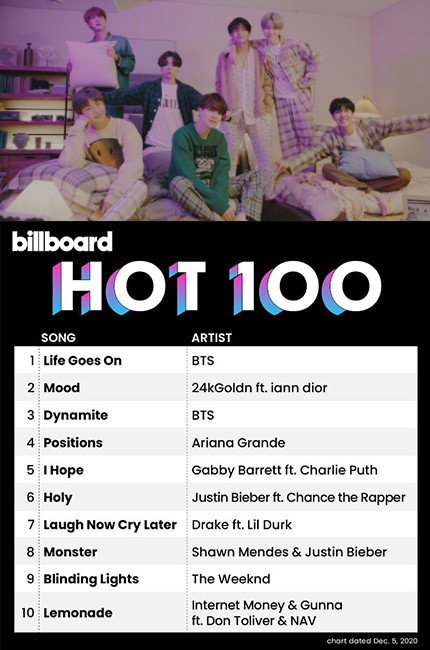 Life Goes On officially debuted atop this week’s Hot 100, making it the first song in the chart’s 62-year history to be sung predominantly in Korean, Billboard said Monday.

It is the second song from the septet to top Billboard’s main singles chart after the hit pop-disco track “Dynamite” released in August. Dynamite still ranks No. 3 on this week’s Hot 100.

In October, BTS featured in a remix version of “Savage Love” by Jason Derulo, which also soared to the top on the Hot 100.

Billboard noted that BTS is the first act to earn the fastest accumulation of three Hot 100 No. 1s in 42 years since the BeeGees earned three No. 1s in two months and three weeks.

In another good news for the septet, the group is safe from conscription worries for at least another two years.

Korea’s National Assembly on Tuesday passed the so-called BTS Military Service Act, allowing military enlistment to be delayed to the age of 30 for individuals in pop culture and the arts that have made significant contributions to enhancing the national status.

The deferral would be granted to artists that have received a special recommendation from the Minister of Culture, Sports and Tourism.

Under current laws, all able-bodied Korean men were required to enlist between the ages of 18 to 28 and serve almost two years in the military.

All seven BTS members are in their 20s. The eldest, Jin, 28, was required to join the military by the end of December this year. With the revised law, he would be able to postpone his enlistment until 2022.