Bank of Thailand ‘has tools to handle strong baht’ 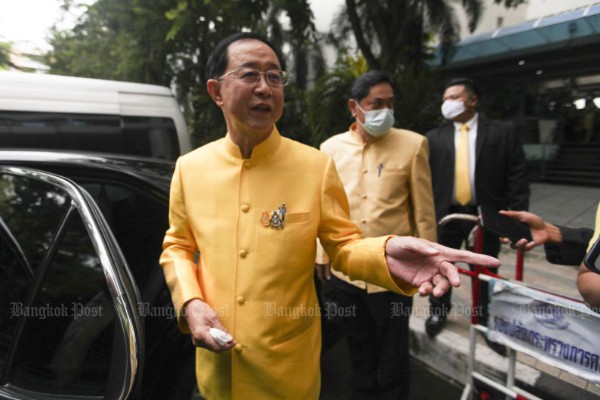 Arkhom Termpittayapaisith arrives at the Finance Ministry on Oct 11, 2020, his first day as the new finance minister. (Photo by Arnun Chonmahatrakool)

Thailand`s central bank has the necessary policy tools to handle the strengthening of the baht, the finance minister said on Monday, as the currency hit its highest level in more than 10 months against the US dollar.

The baht`s strength has been driven by foreign inflows, partly due to optimism over the fundamentals of Southeast Asia`s second-largest economy, Arkhom Termpittayapaisith told reporters.

After discussing the baht with the Bank of Thailand, Mr Arkhom said the central bank should have the policy measures to manage it.

"In managing the baht, monetary policy and fiscal policy must go together... and what to be aware of during capital inflows is speculation," Mr Arkhom said.

Governor Sethaput Suthiwartnarueput told his first briefing last month that the central bank would encourage capital outflows to help ease pressure on the baht as the policy interest rate was already low with limited room to fall further.

The central bank is expected to keep the key rate unchanged at a record low of 0.50% when it meets on Wednesday.

Mr Arkhom said the economy in the fourth quarter should perform better than the previous quarter following government stimulus to bolster consumption.

In the third quarter, gross domestic product declined a less than expected 6.4% from a year earlier, while posting better than expected 6.5% growth on the quarter as domestic activity improved after coronavirus curbs were eased.

That prompted the state planning agency to raise its 2020 economic outlook to a 6% drop from a previous forecast for a 7.3-7.8% contraction.