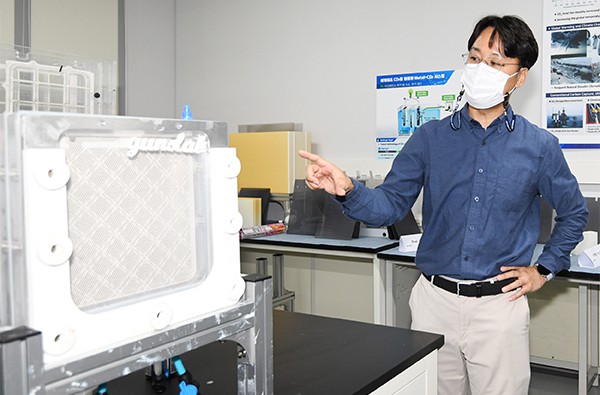 SK Innovation has embarked on what could a revolutionary upcycling innovation to produce power from carbon dioxide, the culprit of heat-trapping greenhouse gases.

The refiner said Wednesday its oil refinery unit Ulsan CLX is working together with Ulsan National Institute of Science and Technology (UNIST) on a project to evaluate a research-stage technology to produce electricity and hydrogen from carbon dioxide.

The project aims to verify the potential scale-up of metal carbon dioxide battery system and its commercialization.

The system developed by UNIST professor Kim Gun-tae is designed to harness CO2 to produce electricity and hydrogen. If successfully commercialized, this technology will be significantly instrumental to reducing air pollutants amid worldwide efforts to recycle CO2 in a response to climate change.

SK Innovation Ulsan CLX has decided to invest in a joint research corporation established by UNIST and others to support the demonstration project.

The two plan to test the possibility of reducing air pollutants such as carbon dioxide, nitrogen oxides and sulfur oxides generated during production at the Ulsan complex. Successful commercial validation will lead to joint business projects, SK Innovation said.

By Lee Yoon-jae and Minu Kim