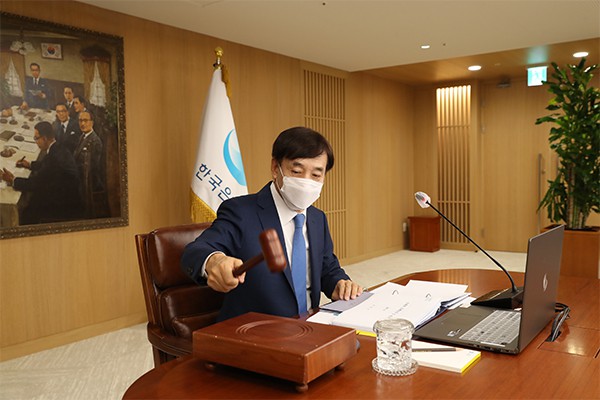 South Korea’s central bank kept the policy rate steady at a record low on Wednesday, as expected, amid questions about the effectiveness of the ultra-loose monetary policy at a time when money circulation is at its most subdued.

The Bank of Korea (BOK)’s monetary policy board held the seven-day repurchase rate at a record low of 0.50 percent, choosing to stay pat for the third session in a row.

It had cut the interest rate by a quarter percentage point in May after delivering an emergency cut of 50 basis points in March to cushion the economic blow of the coronavirus pandemic.

The BOK’s decision comes after the U.S. Federal Reserve signaled last month it would hold its interest rates near zero for at least three more years to support the virus-hit economy.

Like most developed countries, Asia’s fourth-largest economy is likely to face negative growth this year, despite massive fiscal spending and relative success in handling the virus outbreak.

The BOK had previously projected Korea’s gross domestic product to shrink 1.3 percent this year. The Korea Development Institute, a state-run think tank, forecast a contraction of 1.1 percent. The severity of the economic contraction – which would be the first since the 1997-1998 Asian financial crisis – would be better determined after the third-quarter preliminary GDP data is released on Oct. 27.

Exports, a key driver of Korea’s economic growth, rose for the first time in September in seven months. Outbound shipments grew 7.7 percent from a year earlier, due mostly to more working days but also led by robust demand of semiconductors and automobiles.

이미지 확대
Inflation in September gained by the fastest pace in six months, up 1.0 percent from a year earlier, primarily by a spike in fresh food prices due to the abnormally long rainy season.

Floating money in the local economy has surged to historic highs, even as money circulation remains at record lows.

Meanwhile, the velocity of circulation, a measure that divides the gross domestic product by money supply, averaged 0.63 in the second quarter, an all-time low. The currency multiplier, a ratio of money supply to monetary base that is another measure of circulation, also sank to a record low of 15.0 times in May and was pushed down further to 14.7 times in July.

The BOK holds the last monetary policy meeting for the year on Nov. 26.