U.S. auto parts maker ITW on path to pull out of Korea 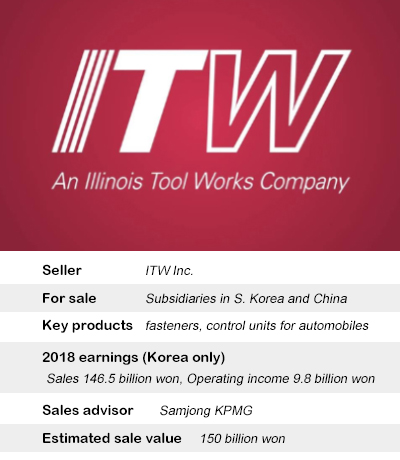 The company has appointed Samjong KPMG as its lead advisor for the sale of its units in Korea and China, according to investment industry sources on Monday. The Korean and Chinese subsidiaries produce automotive fasteners and interior parts for mostly Hyundai Motor, Kia Motors of Korea and Great Wall Motors of China. The value of the two operations is estimated at around 150 million ($128 million.)

The American parent has not revealed the reason for selling the two units but it reportedly is looking for a strategic investor with automotive background that could team up with private equities. An unnamed market expert expected that ITW would prefer a company from the automotive sector as new owner in hopes of creating synergy.

ITW is a global industrial and automotive components maker founded in 1912. Its annual sales amounts to $14.2 billion and market cap $55.8 billion. It is listed on the New York Stock Exchange and included in S&P 500.

Its Korean subsidiary ITW Korea Inc., which the American parent acquired in 2016, registered an operating profit of 9.8 billion won ($8.4 million) last year, which was up 50.8 percent from the previous year. Its sales totaled 146.5 billion won, down 2.8 percent on year, and net profit was 6.6 billion won, up 20 percent on year.

By Park Jae-young and Cho Jeehyun