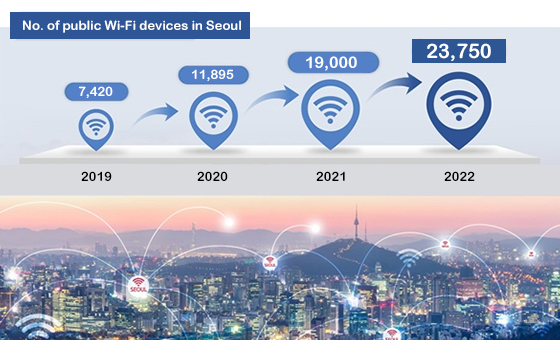 Internet connectivity will become free across the Korean capital of Seoul as Wi-Fi will be available in all public locations from 2022, while parking and street lightening will be controlled remotely by then under the city government’s three-year outline.

According to Seoul Metropolitan Government, it will spend a total 102.7 billion won ($86 million) over the next three years from 2020 on its smart Seoul network (S-Net) project that aims to guarantees citizens’ basic communication rights and establish smart city infrastructure across the city.

The city government will install an additional 1,354 kilometer self-communications network to existing 2,883 kilometers across administrative offices and community service centers.

이미지 확대
Seoul city plans to install free public Wi-Fi network at welfare facilities, local town buses, and parks based on the self-communications network to up communication range from current 31 percent of 326 square kilometer life-zone area to 100 percent. It will increase the number of access points for Wi-Fi service from current 7,420 devices to 23,750 by 2022. Also, the city government plans to apply Wi-Fi 6, the latest Wi-Fi technology that supports maximum speed of 9.6 Gigabits per second.

The expansion in free Wi Fi service will help to save about 50,000 won in monthly phone bill, or maximum 3.8 trillion won a year for 6.12 million wireless users in Seoul.

Seoul will also expand public Internet of Things (IoT) network across the city by installing 1,000 long range (LoRa) stations to its self-communications network to offer various smart services to citizens that utilize IoT sensors such as shared parking and smart streetlight services as well as service to prevent missing child and elderly with dementia.

Seoul Metropolitan Government said that private spaces such as residential homes and apartment complexes are not subject to the latest plan but outside public locations such as streets and parks.

By Na Hyun-joon and Lee Eun-joo