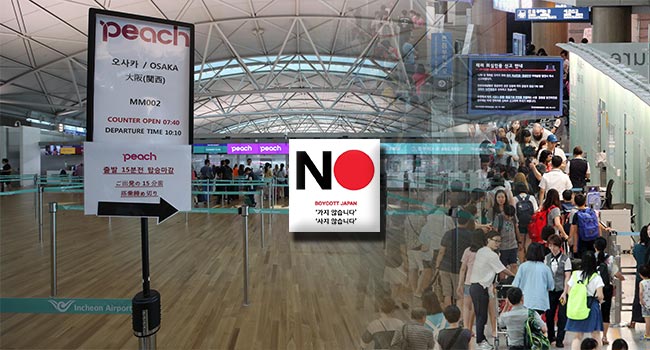 이미지 확대
There is no sign of an imminent recovery in Koreans’ travel demand to Japanese cities amid ongoing Korean consumer-led boycotting against Japanese goods and services in retaliation against Tokyo’s export curbs to Seoul since July.

According to data released by the Ministry of Land, Infrastructure, and Transport on Sunday, a total 1.36 million passengers flew on Japanese routes in September, down 28.4 percent from the same month last year. The weekly flight occupancy rate also plunged to between 61.0 percent and 71.8 percent in September, which is maximum 26.5 percentage points lower than 78.0 percent and 87.7 percent in the first week of September last year.

Industry insiders noted that the number of passengers traveling between Korea and Japan in September plunged following flight suspensions by Korea’s major full-service and low-cost carriers amid intensifying trade disputes between Tokyo and Seoul that have led their bilateral relations to sink to the worst level in decades. In general, when air carriers reduce seat supply, flight occupancy rate should go up. But the occupancy rate, instead, dropped last month, indicating the faster-than-expected drop in Koreans’ travel demand to Japanese cities.

An unnamed official from a national carrier said Koreans’ boycotting against Japanese products and services has resulted in a sharp decline in the number of travelers to Japan. Only those passengers visiting each country for business and overseas studies, as well as a few Japanese tourists have flown to and from Japan, and Korea-Japan routes are expected to continue to suffer from a dwindling number of passengers, the official added.

The flight occupancy rate of Japanese routes has been falling since early July when Japan abruptly tightened controls over exports to Korea of three high-tech materials essential to make Korea’s two mainstay export items semiconductors and displays, citing unknown security reasons. It was followed by Japan’s decision to remove Korea from its list of preferred trading partners, and Korea, in response, removed Japan from its own whitelist later. The escalated trade spat between the two neighbors has led their bilateral ties to rapidly deteriorate, fueling anti-Japanese sentiment among Korean consumers.

The increase was mainly led by a further cut in Japanese routes by Korean national flag carriers. Last year, the flight occupancy rate of Japanese routes reached up to 90 percent between July and September.