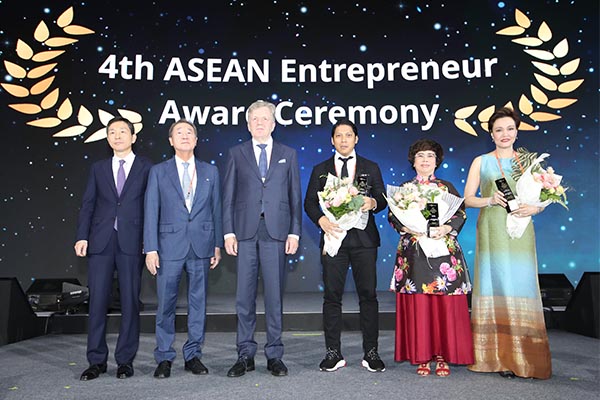 이미지 확대
The fourth ASEAN Entrepreneur Award ceremony co-hosted by Maeil Business Newspaper and the ASEAN KOREA CENTRE under the auspices of Korea’s Ministry of Foreign Affairs and the ASEAN Secretariat took place on Thursday, the second day of the World Knowledge Forum at the Jangchung Arena in Seoul. This year’s winners are as follows:

The ASEAN Entrepreneur Award established by the Maeil Business Newspaper in 2016 was designed to help strengthen networking between ASEAN and Korean businesses. Since last year, the award has been co-hosted by the newspaper company and the ASEAN KOREA CENTRE. This year’s awarding ceremony was also sponsored by the Korean Ministry of Foreign Affairs and the ASEAN Secretariat in celebration of the 30th anniversary of the ASEAN-ROK dialogue relations.

The award winners were commonly recognized for their adventures into the global market beyond their home market in Southeast Asia.

Dusit International CEO Suphajee Suthumpun is leading a new renaissance of the country’s home-grown hotel brand that has 70 years of history. She joined Dusit International in 2016 after serving as global technology head at IBM for over 20 years and as chief executive at Thaicom, a Thai telecommunication satellite company.

In her inaugural address, she put an emphasis on a bold business expansion into more overseas markets for Dusit International, which runs more than 50 hotels and resorts in 14 countries with four hotel brands including five-star Dusit Thani.

"Korea is one of the top three priority markets to Dusit International,” she said, adding “Dusit Thani Guam is well received by Korean tourists.”

이미지 확대
Thai Huong, Chairwoman of TH Group, became a sensation in 2008 by introducing fresh milk to Vietnamese consumers who had thus far received powder milk as a norm. The group was a latecomer but it quickly raised its market share to 40 percent on a phenomenal business success boosted by sales of premium dairy products. This year, TH Group decided to build a dairy and milk processing complex in Russia, a $2.7 billion project, the largest ever investment committed to Russia by a Vietnamese company. A groundbreaking ceremony held in March was attended by Vietnamese President Nguyen Phu Trong and other top officials.

TH Group’s major business focuses in high-tech agriculture, clean and fresh food production for sustainable development. As a pioneer in applying high technologies to agriculture and dairy farming, TH farm is certified as the biggest centralized hi-tech dairy farm in Asia by Asia Book of Records. It has a plan to export functional beverages and organic products to Russia, China and ASEAN member countries. Forbes named her one of the most influential women in Asia for two years in a row. Thai Huong is one of the most respected female business minds in Vietnam.

Robbie Antonio, CEO of Revolution Precrafted, started his business to make high-end modular houses in 2015 with a goal of becoming an IKEA-like company in housing. He works with some 80 architects around the world and sells prefab modular homes in more than 30 countries. House modules are prefabricated at a factory in advance and assembled on site like a Lego block.

Revolution Precrafted is a global supplier of traditional and prefabricated homes, pavilion, retail pop-ups and other related verticals. This company can build a house in two to three months with costs that are 10 percent cheaper than the traditional house. It became Philippines’ first unicorn start-up valued at over $1billion just in two years after its founding. Dozens of architects who have won the Pritzker Prize, considered the Nobel Prize of architecture, are in partnership with Revolution Precrafted.

The winners also expressed anticipation for cooperation with Korea. “If ASEAN companies and Korean universities work together to create and run hospitality-related education and training programs, we can provide decent jobs for young people,” Suphajee Suthumpun suggested. "Vietnam’s agriculture represents a future industry that can grow explosively when combined with abundant resources and disruptive digital technologies," said Thai Huong, adding “smart farming is quite promising.”​