이미지 확대
South Korea could face another major economic crisis next year in the likes of the 1997 Asian financial meltdown or the 2008 economic collapse, warned local economists.

In a survey conducted by Maekyung Luxmen, Korea’s largest monthly economic magazine, together with the Korea Economic Research Institute, half of the 30 economic experts warned of a looming crisis while the remaining half played down the possibility.

Those who took part in the survey included college professors, economists at think tanks and financial firms, and research center heads at brokerage houses.

Nearly all experts gave a grim outlook of the Korean economy. Out of the total 30 respondents, 29 projected the country’s gross domestic product (GDP) to grow by less than 2 percent this year, well below the government estimate of 2.4-2.5 percent or the Bank of Korea’s 2.2 percent.

Asia’s fourth-largest economy saw its GDP in the April-June period gain 1.0 percent on quarter after contracting 0.4 percent in the previous three months, its lowest growth in a decade. 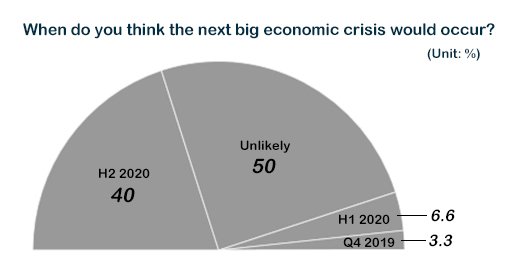 이미지 확대
The respondents were disapproving of President Moon Jae-in’s economic management. About 43 percent of them handed the administration, which has now entered into its third year, a D grade, with 30 percent giving it a C and 20 percent a failing grade. The most problematic economic policies cited were the income-driven growth campaign (30 percent), minimum wage hikes (10.6 percent) and the reduced workweek (10.6 percent).

Under an economic platform to boost growth through higher income, Moon raised the minimum wage by 16.4 percent in 2018 and another 10.9 percent in 2019. But the double-digit hikes have been met with fierce backlash from the corporate sector, especially small businesses that often cannot pass on the higher costs to customers.

In July 2018, Korea also introduced a shorter workweek, capping the maximum weekly working hours to 52 hours from 68. The policy became binding for all companies with more than 300 employees from April 2019. Smaller businesses would be subject to the new law starting January 2020.

When asked about the biggest risks facing the global economy in the fourth quarter, 73 percent of the respondents pointed to the U.S.-China trade war, followed by the global economic slowdown (13 percent), Brexit (5 percent) and the prolonged trade dispute between Korea and Japan (5 percent).

By Ahn Jae-hyung and Kim Hyo-jin