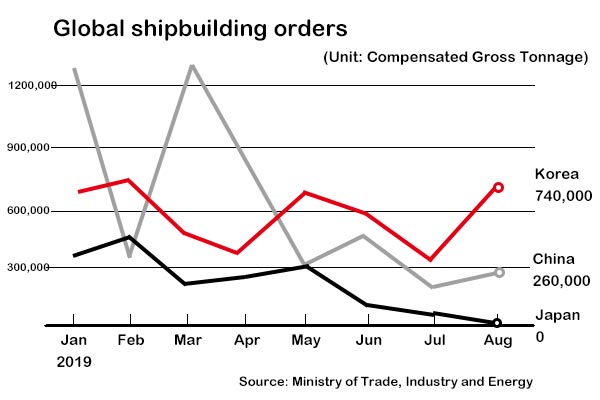 Korean shipbuilders secured 735,000 CGT, or 73.5 percent of the world`s total orders of one million CGT placed last month, according to the data from the Ministry of Trade, Industry and Energy. The Korean shipbuilding industry grabbed the largest share of global orders since May.

By ship type, Korean shipbuilders swept all orders for three LNG carrier orders and 13 of the 14 tankers, including 10 LNG-powered ships in August. Orders won by Korea in the first eight months amounted to $11.3 billion, larger than China`s $10.93 billion. Korea successfully put the brakes on China’s surge with $10.4 billion in order value in the first seven months of this year versus Korea’s $9.6 billion. In terms of tonnage, Korea, however, ranked second with 4.64 million CGT after China`s 5.02 million CGT in the first eight-month period. 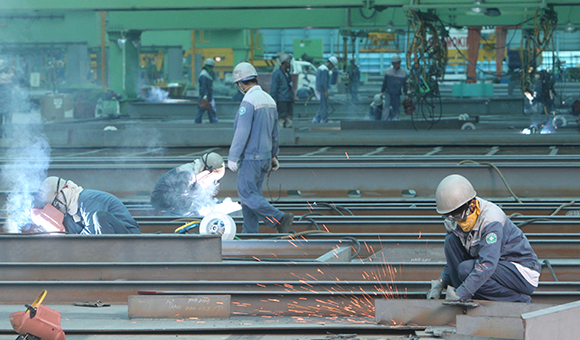 이미지 확대
The ministry attributed Korea’s strong lead in the market to its competitive advantage in high value-added vessels such as LNG carriers and very large crude carriers (VLCCs). Korea won orders for 24 of the 27 LNG carriers and 10 of the 17 VLCCs placed by August.

As shipbuilding work increased, the employment in Korean shipyards recovered to more than 110,000 workers in August after hitting the lowest level of 105,000 in August of last year.​