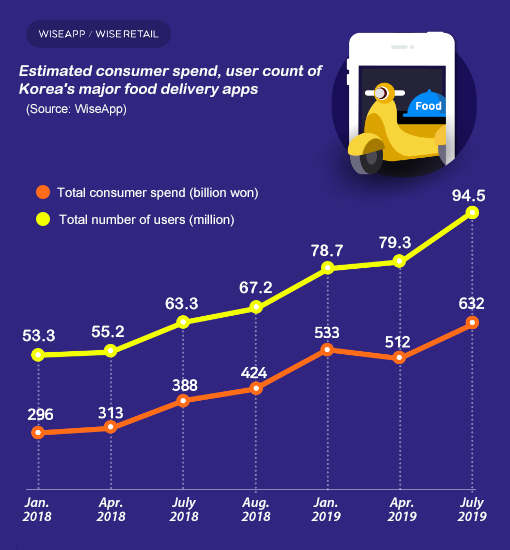 이미지 확대
Korea’s top three food delivery serving platforms – Baedal Minjok, Yogiyo and Baedaltong – have neared the user milestone of 10 million with their combined order value more than doubled from the beginning of last year amid the rise of single-person households in the country.

Payment settlements with the food delivery apps reached 632 billion won ($520.6 million) in July, surging from 296 billion won in January 2018, according to industry tracker WiseApp on Tuesday.

The number of users has ballooned from 5.33 million to 9.45 million over the same period, with those in their 20s and 30s accounting for more than three-quarters of all users.

Payment at the major delivery apps was estimated at 4.4 trillion won last year. The value reached 3.8 trillion won in July and will likely top the 2018 full-year record this month.

WiseApp and WiseRetail tracked delivery orders made by customers aged 20 years and older paid via credit cards, debit cards, wire transfers and mobile payments. The study did not include payments made by corporate cards, business transactions, cash or gift certificates.

A potential game changer is Korea’s ecommerce leader Coupang, which started a trial of its own food delivery service Coupang Eats in June and expanded the service to 17 districts in Seoul in less than three months. Global ride-sharing giant Uber has also launched Uber Eats this year.