The defense and aviation unit of Korea’s eighth-largest conglomerate Hanwha Group is said to be readying to apply for preliminary review for its IPO with the Korea Exchange next month, according to investment bank industry sources on Monday. The company has picked local brokerages Korea Investment & Securities, NH Investment & Securities, and Citigroup Global Markets Korea Securities as co-underwriters.

Details of the IPO, including the number of shares to be offered and book-building schedule, are yet to be announced. Pricing is expected in late November.

The company registered 44.8 billion won in operating profit on revenue of 1.1 trillion won on a consolidated basis last year, which jumped 31 percent and 24 percent, respectively, from a year-ago period. Also, its net profit over the same period nearly tripled to 41.2 billion won. 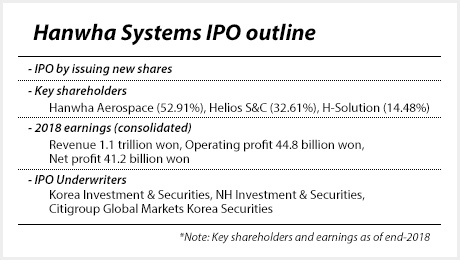 Hanwha Systems is expected to use the IPO proceeds to further strengthen its business, especially to enhance synergy between its mainstay defense unit and the newly merged ICT business. Also, the company is expected to use the fresh fund to buy back shares from its external financial investor STIC Investment, which owns a 32.6 percent stake in Hanwha Systems through Helios S&C.

If Hanwha Systems goes public as planned, the company would become the eighth in 30 units under Hanwha family to go public, and also the first Hanwha company IPO since Hanwha Life Insurance’s listing on the main bourse in 2010. Market experts anticipate the group to proceed with an IPO of Hanwha General Chemical after listing Hanwha Systems.